Will This Player Surpass The NFL All-Time Leading Rushers? 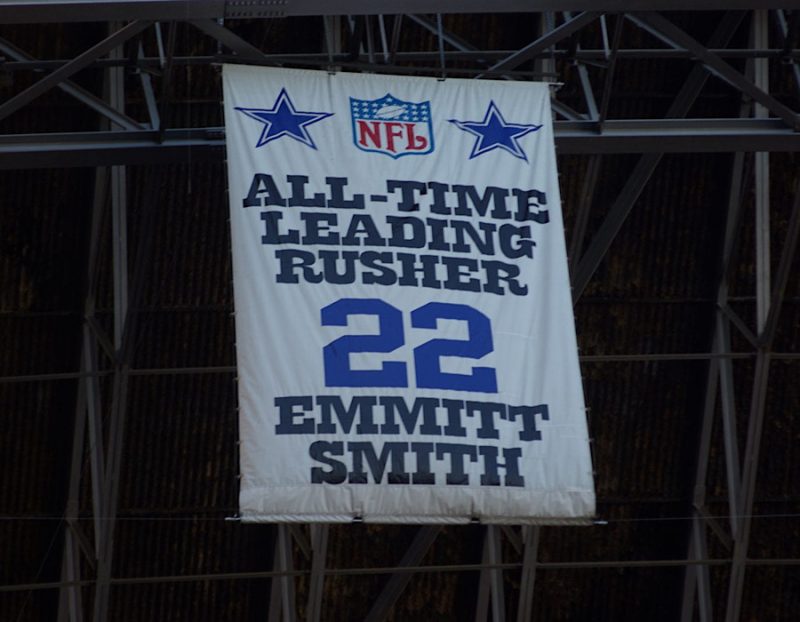 Adrian Peterson knows what he wants from his NFL career: A Super Bowl ring, a chance to play when he is 40, and to surpass the NFL all-time leading rushers. The path to achieving the last of those goals is clearly defined since the number of yards he needs to catch Emmitt Smith and have more rushing yards than any back in history is known. So, would you bet on AP becoming the NFL’s All-Time leading rusher before his career is over?

The goals that 36-year-old running back Adrian Peterson has set for himself are simple, and as he told TMZ recently, “I’m going to keep playing, trying to chase the championship and, God’s willing, within the process of doing that, I’m able to catch Emmitt and pass him.”

AP may need to reach another goal, “I want to live to be a 40-year-old back out there rushing for 1,500 yards and amazing people still,” if he wants to catch Emmitt Smith on the all-time rushing list. After all, he only ran for 604 yards for Detroit last season, which would be enough to elevate him from fifth to fourth overall, moving him past another Lions RB, Barry Sanders.

If AP was able to tack on two seasons equal to his 2020 output, he would move to third all-time by surpassing Frank Gore. The prize that Peterson is eying however, is 3,535 yards away, which is catching Emmitt Smith. Having just turned 36, Peterson would need to find a way to average 707 yards over the next five seasons to not only play till age 40, but overtake Smith for the NFL’s all-time record.

Some might say that Peterson may be one of the few players looking forward to playing a 17-game season, which will allow him one extra game per season to add to his rushing total and move him closer to Smith’s all-time mark. Others, however, may invoke the name Roger Maris, and say that a rushing record of any kind aided by longer seasons may need to be put into a different category.

Being barely over a week since a 43-year-old quarterback finished his first season with a new team with a Super Bowl win and MVP, it’s hard to say that anything can’t be done in the NFL anymore. With that said, Adrian Peterson has been on borrowed time for several years now; not only coming back from his knee injury in seemingly record time, but finding teams to sign him after an issue involving his child that saw him in a world of trouble not too long ago.

It’s only by the good graces of many teams like the Lions that Peterson is even still in the NFL, which also makes it difficult to think there are five more one-year contract in Peterson’s future or another 3,535 yards out there left for him to gain.

In short, whatever Adrian Peterson has left to offer one or more NFL teams over the rest of his career is already remarkable, and with Gore likely hitting the golf course this offseason, Peterson has the best shot to catch Smith since he is the closest active player to him. With that said, without being able to post a four-digit rushing season for some team over the next year or two, I doubt he will have the chance to find enough playing time to make he run at the record; because while he is likely willing to play for the league minimum, it’s a minimum level of output that teams will expect from him.

I don’t think that those in the league will want someone with Peterson’s past holding an important record, so I would expect the NFL to force Peterson into retirement long before he is in line to reach Smith’s record. In other words, the NFL will deem Adrian Peterson unworthy of the record he seeks.

Will This Player Surpass The NFL All-Time Leading Rushers? | TooAthletic.com

The post Will This Player Surpass The NFL All-Time Leading Rushers? appeared first on TOOATHLETIC TAKES.

Would You Trade Deshaun Watson For Jimmy Garoppolo?

Republicans sued over proxy voting in the pandemic. Now…

FBI pinpoints a single suspect in the death of US Capitol…

Teen in hospital for sledding injury dies after dad died…