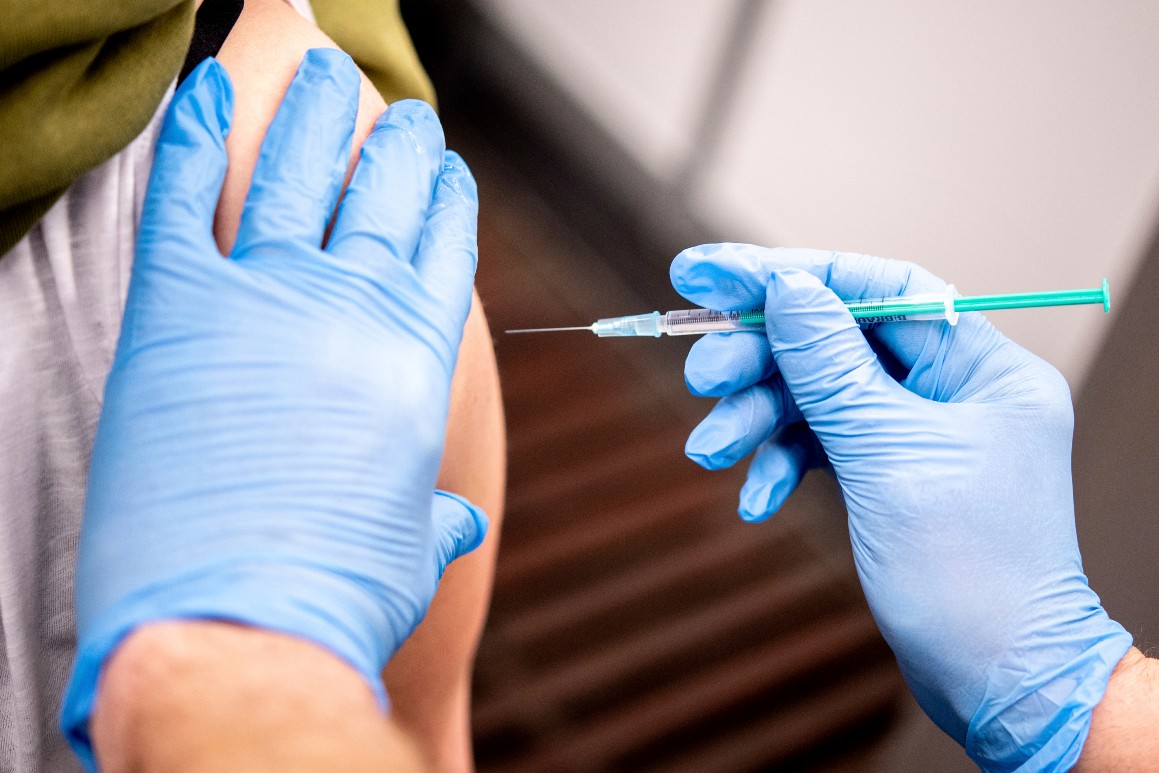 The issues never stop with the Oxford/AstraZeneca vaccine.

After all the fights over contracts and deliveries, the latest challenge is one facing European regulators: Whether to recommend that national governments don’t give the vaccine to younger people, citing a rare but sometimes fatal form of blood clotting.

Several countries have already taken that step and on Tuesday, the head of the European Medicines Agency’s vaccine strategy spoke out on the situation.

“It’s clear that there’s a link,” Marco Cavaleri told Italian newspaper il Messaggero when asked if the vaccine causes the low platelet count and blood clots found in some people who have received the vaccine.

“What causes this reaction, however, we don’t know yet,” Cavaleri said.

The EMA told POLITICO Tuesday that Cavaleri’s comments were “preliminary personal remarks,” while the agency is expected to make a more official announcement about the safety of the vaccine on Wednesday or Thursday.

The comments from Cavaleri were a notable shift from the EU regulator, which has spent the past two months insisting there was no reason for EU countries to restrict or stop using the vaccine — first in February when concerns were raised that there was not enough data to use the vaccine in older people, and again in March over early concerns about serious blood disorders.

The U.K., which has boasted an enviable vaccination rate thanks in part to doses of the vaccine, is also seeing increasing reports of rare but serious blood clots. Channel 4 reported Monday that British regulators are considering restricting the vaccine in young people, a potentially huge blow to the U.K. vaccination campaign, although the agency said it has not made any changes to its advice … “yet.”

Regulators are reluctant to limit the use of the vaccine because, as Cavaleri pointed out, although there could very well be a link between blood clots and the vaccine, its benefits still outweigh its risks.

A very small number of people could have serious side effects — but the vaccine is clearly saving thousands of people from dying with COVID-19.

“In short, if you are currently being offered a dose of Oxford-AstraZeneca vaccine, your chances of remaining alive and well will go up if you take the vaccine and will go down if you don’t,” Adam Finn, a professor of pediatrics at the University of Bristol, wrote in a press release.

Cavaleri gave no indication if the EMA would change course in the short term and advise against giving the vaccine to younger people. Instead, the decision might come down to each country weighing how much caution it wants to exercise.

“Above all, let’s not forget that the weight of COVID is different in the various countries: In Italy, 500 people still die a day; in Norway almost none,” Cavaleri said. “These factors justify different approaches.”

Considering Europe is the most vaccine-skeptic continent in the world, and how cautious countries have been so far, it is likely that EU countries will continue to set age restrictions on the British-Swedish vaccine, especially if reports of blood clotting continue to pile up.

So as Europe waits to hear from the EMA this week, here’s a look at the main issues regulators are dealing with:

Is there a serious problem with the AZ vaccine?

European countries have given out more than 40 million doses of the Oxford/AstraZeneca vaccine. The vast majority of people have had no problems — the most common side effects are merely soreness where the needle went in and basic flu-like symptoms, similar to other vaccines.

Still, there have been very small — but increasing — numbers of people who developed rare blood clotting issues roughly 14 days after receiving the jab.

Some regulators have reported cases of thrombocytopenia, which is when a person has an unusually low level of blood platelets (which stop bleeding by clumping and forming plugs in blood vessel injuries). Thrombosis is a broad term for a blood clot anywhere in the body, while cerebral venous sinus thrombosis (CVST) — confusingly, sometimes referred to as cerebral sinus vein thrombosis (CSVT) — is when a clot occurs in the brain’s venous sinuses, preventing the blood from draining out of the brain and causing a stroke.

These events tend to be more common in younger women. Most reports sent to European regulators were in women between the ages of 22 and 50, although some women were between 50 and 60, Cavaleri said. About 20 percent of the cases were men in their mid-40s.

How unusual is this?

Peter English, former chair of the British Medical Association’s Public Health Medicine Committee, told reporters that the British reports of CVST events amount to about 1.2 cases out of a million doses used.

The EMA said that on average, there are between 2 and 5 cases of CVST in 1 million people. Still, the incidence rate varies depending on the study. Given that the rate cited by the U.K.’s regulator — the Medicines and Healthcare products Regulatory Agency (MHRA) — last week is not wildly off the typical number of cases a country would see in a given year anyway, English wrote that cases linked to the Oxford/AstraZeneca vaccine are “far from being strong evidence of causality.”

English also warned about reporting bias. Now that doctors are aware of the issue and actively looking for it, they might find more of it. “Remember, it is a ‘difficult diagnosis,’ suggesting it may often be missed, and if you look for it more carefully in one group than another, you are likely to find more cases in the group where you look more carefully,” English said.

Why did EU countries stop using the vaccine?

Austria suspended a batch of the Oxford/AstraZeneca vaccine as early as March 7 after one woman died and another became ill after getting vaccinated — both citing blood clotting issues. Other European countries followed suit, first by suspending specific batches and then by restricting its use in younger people. By the end of the month, at least nine EU countries had completely stopped using the vaccine in younger populations over blood clotting issues.

On March 31, however, the EMA said there was no evidence to support these restrictions but the agency’s safety committee would continue to review the reports. The announcement led most EU countries to lift their restrictions.

But reports of blood clotting continued to come in. Reports in the U.K. jumped from 5 to 30 in a week as of March 24. Canada, which hasn’t reported any blood clotting issues, also suspended the vaccine in people under 55 at the end of March, citing the worrisome reports from Europe.

Where does the EU stand now?

While most countries that suspended the use of the jabs reversed their decisions when the EMA gave its cautious all-clear on March 18, several Nordic countries, along with France, took a more cautious approach and continued at least partial suspensions.

In Finland, a full suspension only began after the EMA’s announcement, after two cases of blood clots in the brain. Its National Institute for Health and Welfare said on March 24 that they would only be using the vaccine for those over 65 while investigations continued. Iceland also never fully restarted vaccinating with the jab, limiting its use to over 70s. Sweden only resumed the vaccine for the 65 and over age group, with France allowing those aged 55 and older access to the jab. Estonia has also recommended prioritizing the jab in those over 60.

Norway and Denmark continued the outright suspension of the jab, with Denmark saying on March 25 that it would extend the ban for another three weeks.

Germany then kicked off a second wave of restrictions, announcing at the end of last month that after 31 cases of blood clots in the brain, it would be suspending the use of the jab for those under 60. North Macedonia followed suit the next day, and the Netherlands did the same on April 2. Slovenia’s vaccination advisory group has recommended a similar move.

Why don’t we all stop using the vaccine?

Despite increasing evidence that the Oxford/AstraZeneca vaccine is linked to these rare blood clotting conditions, the vaccine clearly has prevented thousands of people from ending up in the hospital or dying from COVID-19. Public Health England, for example, estimated that the nearly 18 million Oxford/AZ jabs used by the end of March prevented more than 6,100 deaths in people over the age of 70.

The World Health Organization on Tuesday was still saying there was “no link” between the vaccine and the blood clotting events.

“For the time being there is no evidence that the benefit-risk assessment for the vaccine needs to be changed and we know from the data coming from countries like the United Kingdom and others that the benefits are really important in terms of reduction in mortality of populations that are being vaccinated,” said Rogerio Pinto de Sá Gaspar, director of the WHO’s regulation and pre-qualification unit.

Gaspar concluded that we “tend to stress too much the risk” rather than the benefit of the vaccine.

The EMA’s Cavaleri was also clear when asked whether “the risk-reward relationship was still in favor of the vaccine.” He answered with a clear “Yes.”

The agency will then go ahead with a more detailed analysis of different population groups.

Regardless of what the EMA says this week, each EU country might end up making its own decision.

“The public health agencies that run the various vaccination campaigns have different options and can use them as they see fit,” Cavaleri said. “Many expect the EMA to solve the problem for everyone, but it’s not that simple.”

In the U.K., meanwhile, “no decision has yet been made on any regulatory action,” according to the the MHRA. “People should continue to get their vaccine when invited to do so.”

Is Plaid destined to go it alone?