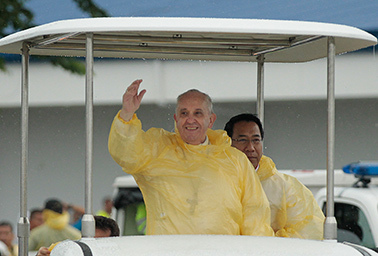 Pope Francis warned of “lurking” anti-Semitism in Europe during a visit Sunday to Hungary, where he met populist Prime Minister Viktor Orbán.

Speaking to Christian and Jewish leaders, Francis said that the threat of anti-Semitism is “still lurking in Europe and elsewhere,” according to the BBC. “This is a fuse that must not be allowed to burn. And the best way to defuse it is to work together, positively, and to promote fraternity,” he said.

Orbán’s government has been accused of fanning the flames of anti-Semitism, as well as Islamophobia and homophobia. In 2017, his government faced heavy criticism for posting thousands of billboards around the country featuring a picture of financier George Soros, who is Jewish, and the slogan “Let’s not let Soros have the last laugh.” Orbán has dismissed allegations of anti-Semitism leveled against him.

Orbán has also frequently presented his government as a defender of Christian Europe against migration.

But the pontiff, who has called on countries to do more to help refugees, urged Hungary to “extend its arms towards everyone.”

“Religious sentiment has been the lifeblood of this nation, so attached to its roots,” he said. “The cross, planted in the ground, not only invites us to be well-rooted, it also raises and extends its arms towards everyone.”

The Vatican said the pope’s 40 minute meeting with Orbán took place in a “cordial atmosphere”.

“Among the various topics discussed were the role of the Church in the Country, the commitment to the protection of the environment, the protection and promotion of the family,” the Vatican said in a statement.

Orbán wrote on Facebook after the meeting that he had “asked Pope Francis not to let Christian Hungary perish.”

Francis spent seven hours in Hungary, before traveling on to Slovakia, where he will stay for three days.