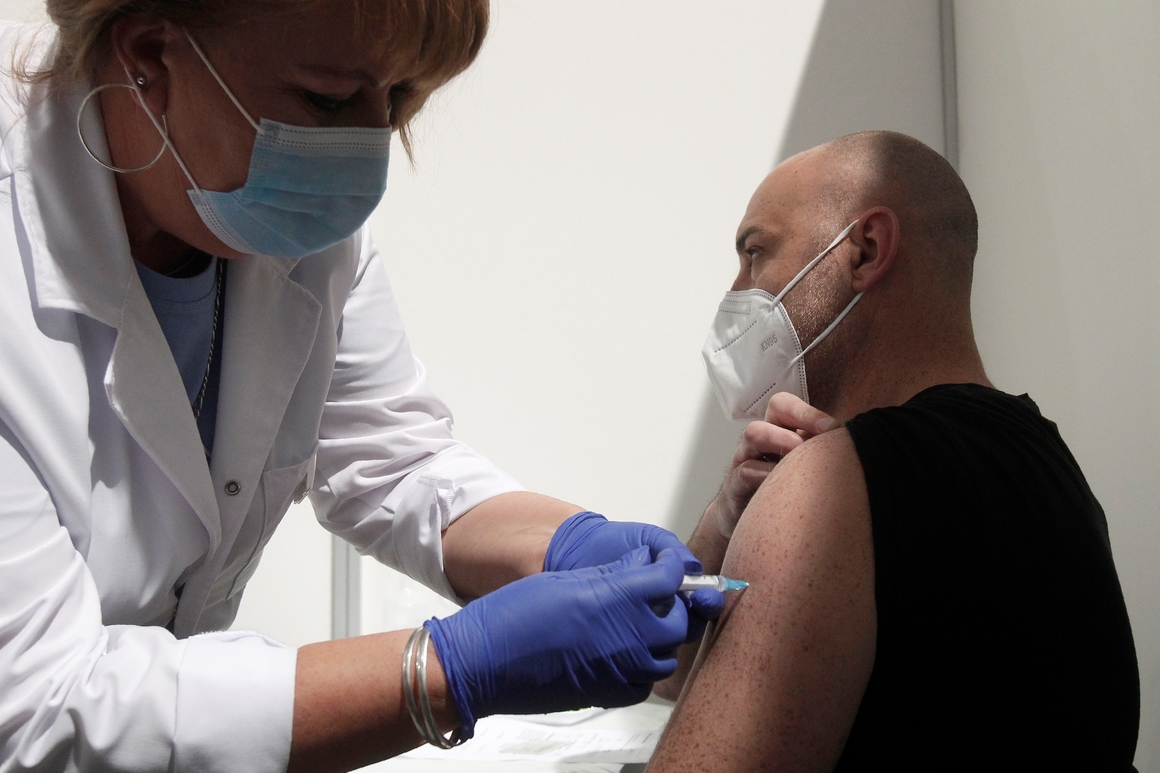 The EU has failed its first vaccine test.

Three months into their coronavirus vaccination campaigns, only five EU countries have met a European Commission goal to vaccinate 80 percent of people over the age of 80 — and only a few of those reporting have vaccinated 80 percent of their health and social care workers.

These missed targets just confirm what many Europeans already feel: The EU’s vaccination efforts have been painfully slow.

The bad news never seems to end. AstraZeneca came up millions of doses short on its projected quarter one deliveries, and EU countries have stopped using the jabs at various times, citing safety concerns. Johnson & Johnson won’t deliver its first doses until the latter half of April. And regardless of delivery shortages or safety issues, many EU countries are simply sitting on doses.

Still, the Commission is promising better news on the horizon with vaccine deliveries set to rapidly increase in the coming months. Sluggish countries like Belgium and France have vowed to speed up their campaigns, and 19 better-off countries said they will send more doses to five of those hardest hit, largely in Central and Eastern Europe.

But the EU has a lot more work to meet the Commission’s goal of vaccinating 70 percent of its adult population by the end of the summer, months after the U.S. aims to give a vaccine to all adults who want one.

After one quarter, POLITICO looks back at how the rollout went — and how it looks for the future. For daily updated figures on the vaccination progress across Europe, see POLITICO’s vaccine tracker.

The EU missed its first target

The bloc is also falling short on the Commission’s goal of vaccinating 80 percent of health and social care workers. These data are sparse, but figures from 14 reporting countries show only four have done so.

By the end of March, the EU expected to have at least 150 million vaccines rolled out. It has fallen well short of that goal — but there’s great variation across the drugmakers’ performance.

The star pupil is BioNTech/Pfizer. The German-American duo surpassed their quarter one goal to supply 60 million doses by delivering 67 million doses as of March 31. They also plan to rapidly increase their deliveries— with help from a new plant in Marburg, Germany — to 200 million vaccines in the second quarter.

Moderna, meanwhile, met its target of supplying 10 million doses in the first quarter. If it stays on track, the U.S. biotech firm will up its quarter two supply to 35 million doses.

The delinquent in the group is Oxford/AstraZeneca, which barely met their bottom-of-the-barrel projection for the first quarter of 2021. The company’s contract projected it would deliver between 80 million and 100 million doses by the end of March, not including the 30 million to 40 million doses it planned to supply by the end of 2020.

Citing issues at its Belgian plant, AstraZeneca then dramatically reduced that goal at the end of January to 31 million doses. After an uproar, it said it would supply around 40 million, shipping some doses from its U.S. plant.

But that pledge also seems to have come up empty. As of March 31, the company delivered 30 million doses, and no doses have been sent from the U.S. Supply should increase now that Halix, a Dutch subcontractor for AstraZeneca, is approved to make doses for the EU. But EU officials doubt the company will meet its target to supply 180 million doses to the bloc by the end of June.

Johnson & Johnson, meanwhile, still hasn’t delivered any doses, although its contract said it would only begin deliveries on April 1 at the earliest. Still, the first deliveries of the one-shot vaccine aren’t expected until around April 15. The company was originally planning to bottle its EU-destined vaccines in the U.S., but this won’t be possible for months until the U.S. allows doses to be exported outside the country.

IDT Biologika, a German company, was newly contracted to bottle the vaccines starting in mid-March, but these doses still need to complete quality checks that take about four weeks.

In the meantime, some countries have turned to other vaccine manufacturers to source their doses, but they don’t play a big role overall. At the end of March, Hungary had received half a million doses of the Russian Sputnik V vaccine and 1.1 million doses of Chinese Sinopharm/Beijing, according to the latest data from the ECDC. And Slovakia received 200,000 doses of Sputnik in early March.

Another issue is that some EU countries aren’t using all of the doses they have. Some are holding back second doses to fully vaccinate people, while others are simply rolling out the vaccines slowly. Bulgaria and the Netherlands, for example, are sitting on more than 34 percent of their available doses, according to the most recent ECDC data.

In a perfect world, the EU should receive around 470 million doses of approved vaccines by the end of the second quarter.

Still, few EU officials believe everything will go according to plan. “We have seen from past experience all sorts of things can go wrong,” said one diplomat this week after Austria unsuccessfully picked a fight with Brussels over re-allocating doses.

One ongoing source of tension is that these second-quarter doses won’t be distributed equally across the EU, because some countries purchased fewer doses than they could have based on their pro-rata allocation. Many smaller and poorer countries, for example, banked heavily on the cheaper Oxford/AstraZeneca jab and purchased fewer mRNA vaccines. Richer countries, like Germany, Denmark and Malta, bought the surplus instead.

Meanwhile, EU diplomats this week were given a graphic predicting each country’s vaccination rate by June 30 if each company delivers on its promises and each country uses every shot available.

This chart doesn’t take into account a new deal in which 19 countries agreed to send more than 2.8 million vaccines to the five countries predicted to have the lowest vaccination rates, largely due to Oxford/AstraZeneca shortages: Bulgaria, Croatia, Estonia, Latvia and Slovakia.

This chart also doesn’t take into account other vaccines that could be approved by the European Medicines Agency in the second quarter. The agency has rolling reviews for Novavax, with which the Commission still hasn’t finalized a purchasing agreement; Russia’s Sputnik, which some countries are already using on a national basis; and CureVac, from which the Commission has purchased more than 400 million doses and is expected to be approved sometime in the summer.

The chart also doesn’t take into account the use of either Sputnik V or Sinopharm/Beijing, which Hungary is using.

This article is part of POLITICO’s premium policy service: Pro Health Care. From drug pricing, EMA, vaccines, pharma and more, our specialized journalists keep you on top of the topics driving the health care policy agenda. Email [email protected] for a complimentary trial.