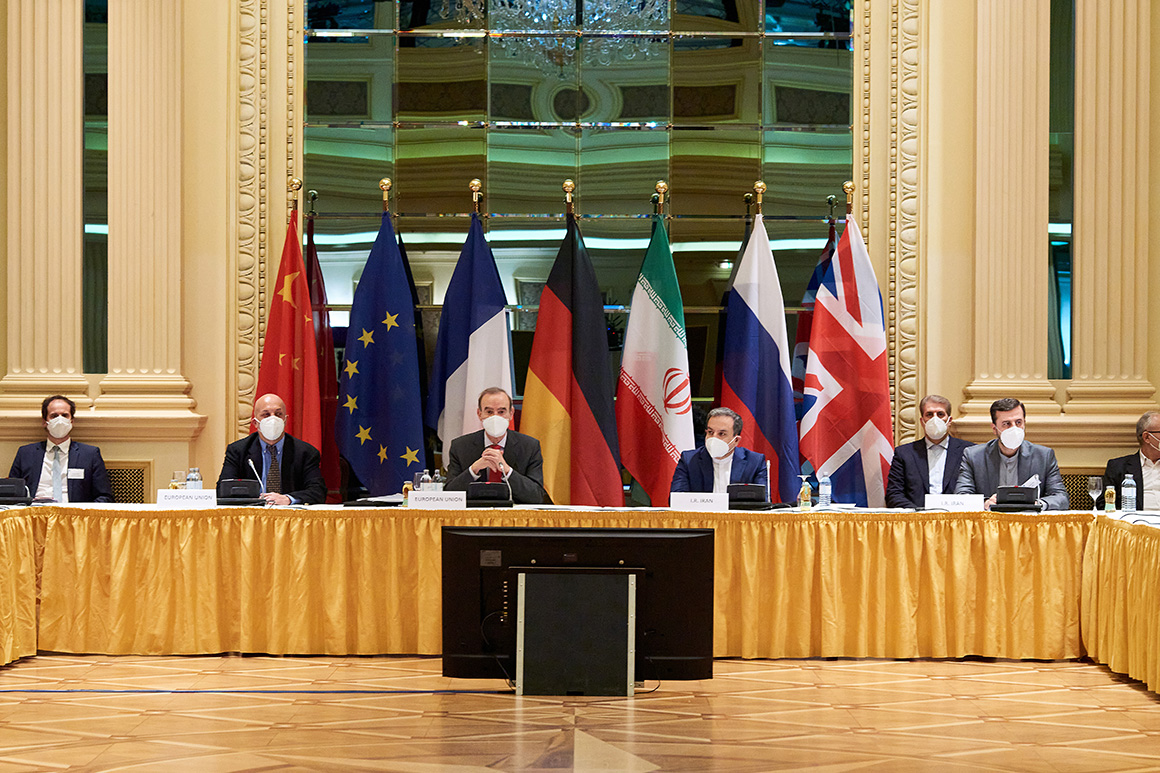 VIENNA — Negotiators trying to get the U.S. and Tehran back into compliance with the Iran nuclear deal are making progress, according to officials, with some even saying the talks have reached a halfway point.

But the talks remain fragile and will not be completed in the current round of discussions; diplomats are set to take a break after Tuesday’s talks before gathering again next week. Specifically, officials are negotiating how to restore the original bargain of the 2015 Iran nuclear deal — curbing Iran’s nuclear program and preventing the regime from building a bomb, in return for sanctions lifting by the U.S.

This involves negotiating how Iran might dispose of its excess nuclear material or what to do with advanced centrifuges, machines that are used to enrich uranium gas. And they’re debating which sanctions the U.S. might unwind from the raft of penalties it imposed under the 2015 deal, as well as under the Trump administration.

One diplomat familiar with negotiations, who spoke on the condition of anonymity, said that in the past few days, negotiations have “picked up speed” and reached “approximately halfway.” The person predicted a deal could emerge after “one or two additional rounds of negotiations” in Vienna.

The assessment tracked with the latest update from Iranian President Hassan Rouhani, who said on Tuesday that “the talks in Vienna have progressed by about 60 to 70 percent,” saying results could come “in a short time.” But he also stressed a deal would only work “if Americans act within the framework of honesty” — a message likely meant to satisfy Iranian hardliners.

The signals, while positive, hardly guarantee success. Iran is still smarting from what it claims was an Israeli attack on its main nuclear facility at Natanz in early April. And there’s pressure in the U.S. on President Joe Biden to retain some of the recent economic restrictions on Iran — a position that Tehran, at least publicly, says is unacceptable.

Additionally, the two sides haven’t come to an agreement on how to sequence their respective steps. Does the U.S. lift sanctions first? Or does Iran unwind its nuclear progress first? Can they somehow do it in tandem?

On top of that, the U.S. and Iran have yet to engage each other directly. They are still using European diplomats as intermediaries.

“Progress was made over the last two weeks,” tweeted Enrique Mora, a senior EU official overseeing the talks, on Tuesday, but added “much more hard work was needed.”

Ned Price, the U.S. State Department spokesperson, was more cautious on Tuesday in his assessment of the talks, calling them “business-like” and “positive.” Still, he agreed “some progress” had been made.

“We have more road ahead of us than we have behind us,” he said.

The Joint Commission, responsible for overseeing the implementation of the nuclear deal, met Tuesday to resume its plenary meeting at the five-star Grand Hotel in Vienna.

Across the road, a small group of protesters called on the Iranian regime to release all political prisoners, chanting, “set them free, set them free.”

The Joint Commission gathering comes after eight days of intensive consultations among diplomats from Iran, Britain, China, France, Germany and Russia — the remaining parties to the accord — and the U.S.

Iran is still refusing to hold direct talks with the U.S., forcing European officials to shuttle between the two parties. This meant the negotiations involved “a lot of coordination,” as another diplomat at the talks put it.

European diplomats first have to create an understanding among themselves, then coordinate with China, Russia and Iran, and then take proposals across the Ringstrasse to the U.S. delegation that has installed itself at Hotel Imperial.

The first diplomatic source said progress has been made on identifying the various measures the U.S. and Iran needed to take to restore the deal, officially known as the Joint Comprehensive Plan of Action, or JCPOA.

For example, diplomats are discussing whether Iran might sell or dilute the excess nuclear material it has acquired since leaving compliance with the original agreement.

Iran recently started enriching uranium at 60 percent purity in response to the Natanz incident, a huge jump that brought it closer to the 90 percent threshold needed to build an atomic bomb. Under the nuclear deal, Iran is only allowed to enrich uranium at 3.67 percent purity.

Additionally, the two sides have a better understanding of which sanctions the U.S. could lift.

Iran wants the U.S. to first lift all sanctions, including those rolled back under the original 2015 deal, as well as all additional, non-nuclear restrictions the Trump administration imposed after 2017. Those penalties were wide-ranging, and included a blacklisting of Iran’s Central Bank and other companies for alleged terrorist financing.

Most experts believe that the U.S. will want to retain at least some of these non-nuclear sanctions, given the political pressure at home, and to maintain leverage for any possible follow-up talks with Iran on reining in its ballistic missile program or destabilizing behavior in the region.

Daryl Kimball, executive director of the Washington-based Arms Control Association, said that “Iran, while talking tough publicly, will realize that it will need to be more pragmatic about which of the non-nuclear sanctions imposed since 2017 should be lifted.”

But the sequencing of the steps that the U.S. and Iran must take is still unclear. To make progress on this, the Joint Commission on Tuesday created a working group to develop a detailed plan.

The clock is ticking

Even though the two sides are plodding forward, there are looming deadlines ahead.

Iran has a presidential election on June 18, raising the prospect that a more hardline leader could emerge.

Another important deadline is May 22, the day that a temporary inspections agreement between Iran and the International Atomic Energy Agency (IAEA) is set to expire.

Under the agreement, the data collected by IAEA cameras inside Iran’s nuclear plants will be retained exclusively by Iran for three months. If no return to the accord is negotiated by then, Iran has threatened to destroy the data, making it impossible for IAEA inspectors to verify any political agreement.

Negotiators have therefore already agreed to resume their meetings in Vienna next week.