How to needle Vladimir Putin on HIV prevention – POLITICO 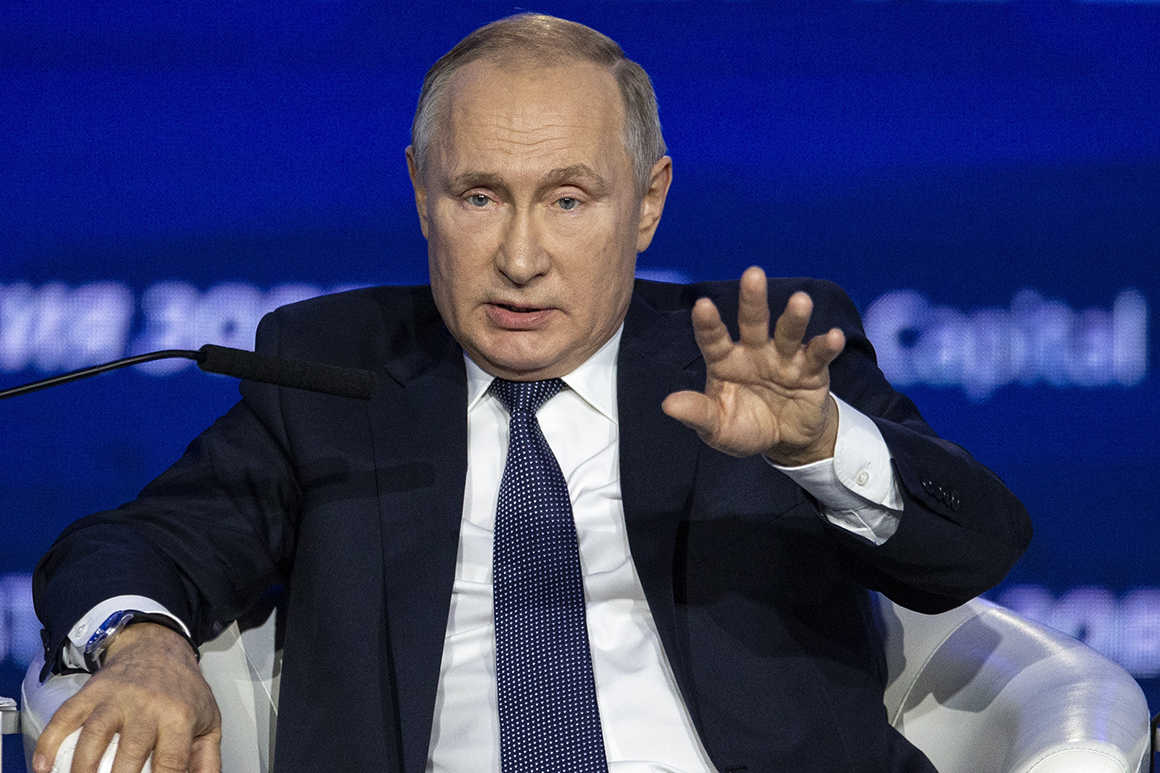 This is a POLITICO case study, a look at what works — and what doesn’t  — in the fight against HIV. The article is part of Telescope: The New AIDS Epidemic, a deep-dive investigation into the modern face of a disease that transformed the world.

Russia has one of the world’s worst HIV epidemics. With an estimated 2 to 3 percent of the population using injection drugs, dirty syringes have contributed to an exponential rise in cases since 2000. Official statistics claim at least 1.1 percent of Russians live with the virus, and that likely underestimates the true scope of the problem.

Though harm reduction was once controversial, most global health policy experts now accept it: While it would be ideal for people to kick their drug habits, it’s better to offer them safe ways to use, rather than compounding addiction with HIV, hepatitis and other illnesses that come from sharing needles. UNAIDS — the UN program devoted to fighting the disease — endorses decriminalizing drugs more broadly, arguing that stigma and fear of punishment stop people from getting needed care.

Michel Kazatchkine, special advisor to UNAIDS  for Eastern Europe and Central Asia, on the case for harm reduction:

The Russian government resists this approach in favor of harsh drug restrictions and tough-love treatment programs.

Injection drug use accounted for about a third of Russian cases last year (compared to just 12 percent worldwide). And that’s down from 50 percent in 2016, but that reduced share isn’t necessarily good news: HIV is cases are on the rise generally and surging beyond vulnerable groups like drug users and gay men into the general population, with six in 10 cases attributable to heterosexual sex.

Russia’s policy choices and culture on HIV and drugs are proving influential elsewhere in the neighborhood — and not in a helpful way. Neighboring Ukraine’s program to use methadone to help people kick opioids is considered a model for the region, but when Moscow annexed Crimea in 2014, the Russian ban on the practice ended the Ukrainian program there — with deadly consequences. In Kazakhstan, Kremlin-inspired anti-methadone propaganda is everywhere, according to Michel Kazatchkine, special advisor to UNAIDS for Eastern Europe and Central Asia. The Russian health ministry did not respond to an interview request.

Anya Sarang, director of the Andrey Rylkov Foundation, said official resistance to harm reduction is part of President Vladimir Putin’s broader posture of defiance against more liberal Western values at the expense of public health. So her Moscow-based NGO is trying to change minds both in the Kremlin and in the Russian mainstream, by providing harm reduction services and building a human-rights case against the war on drugs. And as opioid crises fuel HIV flare-ups in two Western countries, the U.S. and Scotland, the foundation’s work has taken on global relevance too.

HOW THEY DID IT

The Andrey Rylkov Foundation launched in 2009, with Russian HIV prevention at a turning point

In the mid-2000s, about 80 harm reduction programs had been working in the Russian Federation, often with the tacit support of the Russian health ministry and funding from the Global Fund to Fight AIDS, Tuberculosis and Malaria. Then, in 2006, Russia announced it would pay for HIV services itself, and didn’t need the Global Fund’s help anymore.

The same year, Putin gave what is so far the only speech about fighting AIDS of his long tenure. It signaled a shift in policy. “Our task is to promote a healthy way of life and raise awareness of the importance of moral values,” he said.

Harm reduction services soon started to disappear in Russia — and Sarang and other longtime HIV outreach specialists decided they needed a new type of organization, combining service provision with advocacy.

Money and a message: The foundation bought its first supplies with a $15,000 gift from a deceased American supporter. To raise the alarm both at home and abroad, Sarang published the harrowing story of Kostya Proletarsky, which has since been adapted into an animated documentary.

Shortly before his death from tuberculosis, the top cause of death for AIDS patients in Russia, Proletarsky described his struggle to find help for his drug addiction. In prison, he’d been denied antiretrovirals and forced to inhale ammonia. He also contracted the TB that ended his life.

No permission: Needle exchange wasn’t technically illegal. But other NGOs were loath to do it without explicit permission from the government. The Andrey Rylkov team decided to just go for it and deal with problems as they arose. Their funding base and corps of volunteers grew.

Sarang on dealing with the police in Moscow:

Building the case: The foundation’s website became a trove of documentation of alleged human rights violations related to drug enforcement. It provided training for police and ran tours for journalists to improve their drug policy coverage. Strategic litigation at the European Court of Human Rights highlighted wrenching stories, including the case of a mother who lost custody of three children because of her drug use, though no neglect had been reported.

Foreign agents: A big problem arose in 2016, when the Andrey Rylkov Foundation and several other HIV organizations were forced to register as a “foreign agent.”

The foreign agent rule had been created four years before to target political groups and NGOs that receive foreign funding. Critics said its real goal was to kneecap civil society. Affected groups would have to submit reams of new paperwork and label all communications — even individual tweets — as originating from a foreign agent, or face stiff fines. For the foundation, successful programs like training for police officers would have to stop, and access to government grants would be cut off. Lawyers advised the foundation to close shop.

Hefty fines: The foundation is constantly under threat of huge levies for minor infractions, like a stray link to a report from the now-banned Open Society Foundation. A few years ago, warnings on the foundation’s site about the dangers of new drugs ran afoul of strict drug propaganda laws, resulting in a €10,000 fine. Sarang worried they’d have to shut down, but crowdfunding — with most of the support coming from Russians — showed that the foundation had a strong following among the public. The Global Fund has restored financing for the Andrey Rylkov Foundation and other Russian HIV NGOs in recent years, given the government’s lack of support.

It’s always something: Ultimately, the website became too much of a liability. The latest threat of audits and fines came from the head of the Russian parliament’s security committee last year, angered by a report highlighting COVID-19’s disproportionate impact on people who are addicted to drugs. The site has since been stripped of all the information about harm reduction services, drug policy reports and documentation on human rights violations. The donation page remains.

Only one thing has managed to interrupt the Andrey Rylkov Foundation’s work — and it wasn’t a government. This month’s rise of the Delta variant of the coronavirus did cause them to pause activities for two weeks.

Otherwise, the foundation is serving 3,000 to 4,000 people a year with street outreach, Sarang said. Beyond HIV, some 700 people have reported they’ve used Naloxone distributed by Andrey Rylkov to reverse an opioid overdose.

Sarang is also convinced that the foundation’s advocacy is prompting an awakening in the Russian public on the need for a more humane drug addiction policy.

Sarang on the changing political attitudes about drug addiction in Russia:

The Andrey Rylkov Foundation isn’t the only needle exchange service in Russia. In St. Petersburg, the 20-year-old Humanitarian Action Foundation has also been out in the streets, albeit much more quietly.

Until recently, the service-minus-advocacy approach seemed to result in fewer clashes with the government. But that changed last year, when Humanitarian Action was also added to the foreign agents list. (Humanitarian Action Foundation officials said they weren’t available for an interview in English by deadline and that given the circumstances, they’ve cut off most external communications.)

Kazatchkine on how local changes could provide a basis for national overhaul:

For the Andrey Rylkov staff, the political part of their work is still fundamental, even if it creates more obstacles — and the foreign agent listing of the Humanitarian Action Foundation only proves the point. Then again, Sarang said, the foundation rarely plans more than a year in advance, and taking steps to ensure personal safety are key. (Sarang herself is based in the Netherlands, an arrangement that wasn’t initially related to the foundation’s work but has turned into another bit of insurance.)

Being part of the broader movement against harsh drug policies has also been key to the foundation’s survival, Sarang said. Helping to build a community pushing for stronger democratic rights creates more space for them to operate freely.

Sarang on drawing a connection between drug policy and democracy:

The Kremlin seems more determined than ever to lead a socially conservative course on HIV prevention. Last month, it launched a last-ditch attempt to remove language about harm reduction (among other things) from a UN declaration on the fight against HIV. Russia ultimately forced a vote and refused to back the statement, an unprecedented breach of consensus.

Kazatchkine, a former Global Fund chief who has seen organizations’ work on the ground, lamented that even as HIV doctors see the evidence for harm reduction, they won’t speak out to the government.

Kazatchkine on the limited prospects for changing drug policy in Russia:

Can building a case and community on the local level prompt change to national policy — or will Russian harm reduction NGOs just be shut down before making their case?

This article is produced with full editorial independence by POLITICO reporters and editors. Learn more about editorial content presented by outside advertisers.