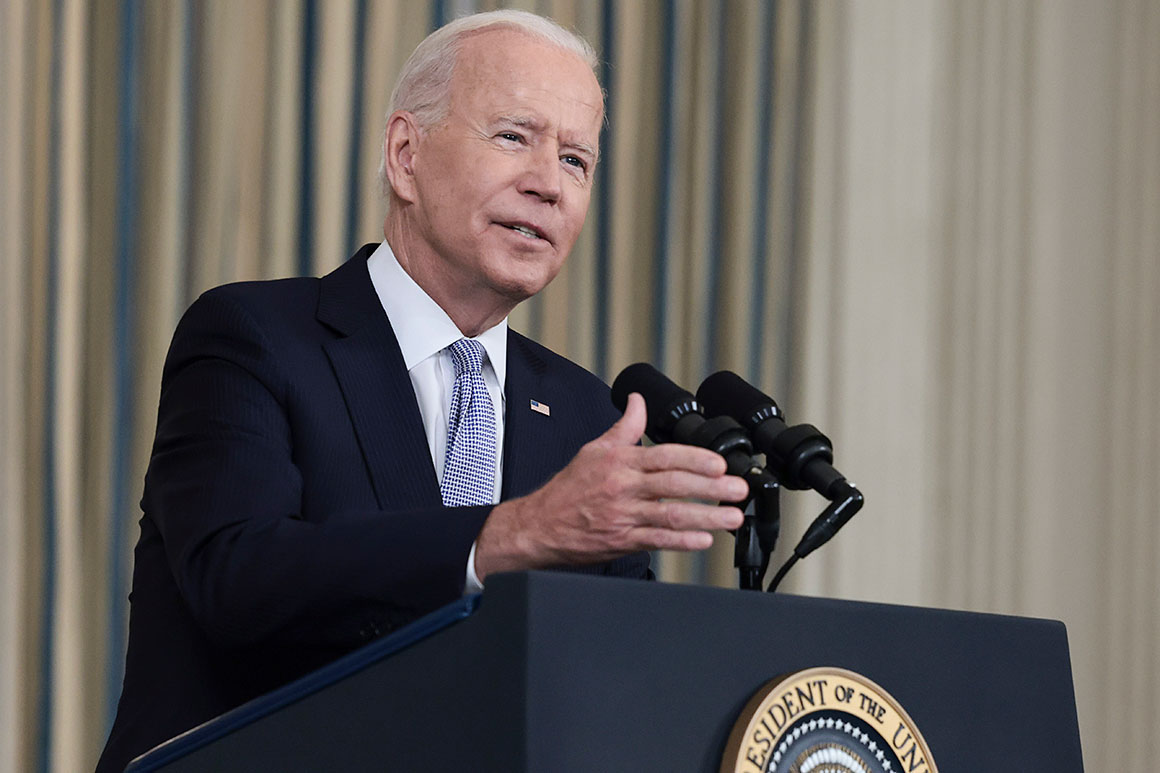 NEW YORK — This is not the Joe Biden that Europe wanted.

After he defeated Donald Trump, many Europeans hailed Biden as a conquering hero — the quiet, cool kid who kicked the loudmouth bully out of the playground.

What EU leaders expected was the Biden they had taken pictures with on his countless visits overseas, and who regularly attended the annual Munich Security Conference. The transatlanticist Biden. The Europeanist Biden. The mulitateralist Biden.

When Biden, at a special virtual Munich Security Conference convened to celebrate the start of his presidency, declared “America is back,” European leaders didn’t think he meant back to the arrogant exceptionalism that has often defined Washington’s approach to the EU and toward NATO.

But on Friday, Biden closed out his first high-level U.N. General Assembly week by assembling the leaders of “the Quad” — Australia, India, Japan and the U.S. — at the White House. By showcasing his focus on Asia, and excluding the Europeans, Biden made it abundantly clear that rather than leading a rejuvenated Western alliance, with Berlin, Paris and Brussels as major partners, he plans to lead smaller, regional alliances focused on U.S. interests.

“The occasion of the Quad summit is an opportunity to refocus ourselves and the world on the Indo-Pacific and our vision for what we hope to achieve,” the Quad leaders declared in a statement.

The declaration included a line saying, “We also welcome the September 2021 EU Strategy for Cooperation in the Indo-Pacific.” But it was abundantly clear that EU countries were among the crowd being “refocused” and not in the room helping to lead that effort.

On tech, for example, the U.S.’s Quad partners have proven more willing to get in line with Washington’s position on China – precisely on issues where it’s had trouble convincing European counterparts of its positions. India this year banned Chinese apps TikTok, WeChat and others, while Australia and Japan have also proven close allies in Washington’s push against Chinese giant Huawei and other Chinese giants in past years.

The Quad pressed ahead with Washington’s plan to build a global technology supply chain with like-minded, democratic countries – and without Chinese involvement — even as European capitals have resisted this anti-China strategy for fears of harming economic ties with Beijing and spurring the U.S.-China tech rivalry.

‘Not good for the West’

At a news conference on Friday to sum up his own work during the high-level U.N. week, Josep Borell, the EU’s foreign policy chief, started by talking about how much of his visit was consumed by dealing with the fallout from a surprise announcement by Biden of a new Indo-Pacific strategic alliance with the U.K. and Australia, which also included the cancellation of a giant contract for Australia to purchase French-built submarines.

“The lack of communications and confrontation between the close partners … [has] created real difficulties,” he added, saying this was “a not-good image of the coordination between strong allies” and “not good for the West.”

Noting a phone call between Biden and French President Emmanuel Macron to begin smoothing over the controversy, Borrell said “the process had not been well handled, could have been better handled. And both sides agreed that prior consultation would have been beneficial.”

But while Macron notably made some gains in that conversation, winning what appeared to be Biden’s support for the EU to build its own stronger military capabilities, the entire episode only confirmed the sinking feeling among European leaders that Biden is not going to be the president, or the partner, they hoped for.

On Friday, European Council President Charles Michel, who at a news conference in New York earlier in the week accused Biden of showing a lack of loyalty and lack of transparency, delivered his formal speech to the U.N. General Assembly, which had been reshaped to put added emphasis on the need for the EU’s strategic independence.

Michel quoted a former U.N. secretary general. “Kofi Annan said: ‘To become a good citizen, start in your own community!’ It’s in this vein that I want to explain why the European Union wants to become stronger and strategically autonomous, alongside an open market,” Michel said. “Stronger not only for itself but also to better contribute to a better world.”

“More than ever, the European Union is defending the rules-based international order and cooperation based on universal values,” Michel continued. “The European Union wants to be stronger, more autonomous, and firmer, to defend a fairer world.”

Many EU officials and diplomats have chalked up the recent diplomatic feud over the Indo-Pacific to Washington’s, and Biden’s, obsessive focus on China, as well as to a desire by the White House to begin resurrecting its international reputation after the rushed and chaotic withdrawal from Afghanistan.

For the U.S. to most quickly assert itself, the Europeans concede, it is only natural for the White House to turn first to its English-speaking “Five Eyes” alliance — Australia, Canada, New Zealand, the United Kingdom.

Michel, in his speech to the General Assembly on Friday, said there was no question that the EU was closer to Washington than to Beijing, but he also stressed that Brussels would chart its own path in any contest of great powers.

“Since I became president of the European Council, I have often been asked a question that is both simple and brutal: In the new rivalry between the United States and China, which side is the European Union on?”

“We are deeply connected with the United States,” Michel said, answering his own question. “We share ideals, values and a mutual affection that have been strengthened through the trials of history. They remain embodied today in a vital transatlantic alliance. This does not prevent us from occasionally having divergent approaches or interests.”

And he went on to criticize China on human rights, over its treatment of the Uyghurs, and its suppression of democracy and rule of law in Hong Kong. In the end, he said: We stand on the side of the fundamental values of democracy, human rights, the rule of law and cooperation. It’s our compass to pursue our interests. The European Union is an autonomous force, master of our choices, master of our destiny.”

Whether the EU can indeed be an autonomous force remains to be seen. Many EU countries believe that Europe still cannot protect itself, especially against a military power like Russia, without help from the United States.

Already, some EU leaders, including Danish Prime Minister Mette Frederiksen, have suggested that the Indo-Pacrific controversy was overblown and the entire EU should not be dragged into France’s unhappiness over losing a contract to build submarines for Australia. Asked if she understood France’s frustration with Washington, Frederiksen told the Danish news site Politikien: “No I don’t understand it. I don’t understand it at all,” adding that she saw Biden as “very loyal.”

In her own speech to the General Assembly on Friday, Frederiksen did not mention the Indo-Pacific security issues. That was true of nearly all of the dozen EU leaders who spoke on Friday.

Some focused on national or regional concerns, like Greek Prime Minister Kyriakos Mitsotakis, who sharply criticized Turkey over provocations in the Mediterranean. Others flew at a higher altitude, like Prime Minister Xavier Bettel of Luxembourg, who made a pitch for world peace.

“Despite calls for a global cease-fire that would allow us to focus all of our energy on global emergencies, plague and climate, and the full realization of human rights, conflicts persist,” Bettel said. “They are the result of tensions between states and within societies which reflect a deep crisis of trust.”

Adding to the difficulties between Brussels and the White House are the customary challenges that national governments face in figuring out who to deal with in the EU, as well as the continuing absence of a U.S. ambassador because of delays with Senate confirmation of Biden’s nominee, Mark Gitenstein. (Biden’s nominee to be ambassador to France, Denise Campbell Bauer, is also still awaiting Senate approval).

Some EU officials said they hoped France could leverage Biden’s support for a stronger and more independent EU military posture, using Washington’s backing to help persuade some EU countries, especially in Eastern Europe, who have long opposed so-called “strategic autonomy” for fear it would undermine NATO and weaken U.S. commitment.

How strongly Biden intended to endorse European strategic sovereignty is not clear. At best, it seems Biden would not be an obstacle, but it is far from clear he will actively promote Macron’s goals.

Meanwhile, Biden’s comments from February now ring a bit hollow to many European ears. “It comes down to this,” Biden had declared. “The partnership between Europe and the United States in my view is, and must remain, the cornerstone of all we hope to accomplish in the 21st century, just as we did in the 20th century.”

The partnership seems more a pebble kicked along the road out of habit than the bedrock of anything.

“Let me erase any lingering doubt,” he said. “The United States will work closely with our European Union partners in the capitals across the continent, from Rome to Riga, to meet the range of shared challenges we face.”

At his news conference summing up U.N. week, Borrell said that based on his conversations he saw a world ill-at-ease, shaken by the pandemic, more chaotic and disorganized than at any point in his long career in diplomacy.

Echoing comments by U.N. Secretary-General António Guterres, Borrell said: “The work is becoming more entropic. You know the word entropy, it’s more disorder. More poles. More multipolarity, and less multilaterally. In the past the world was bipolar, then become unipolar, now it’s multipolar. So there’s a certain feeling of disorder, where there are new actors that become more and more assertive.”

“The U.S. has announced clearly in President Biden, but also President Trump and also President Obama, their will of withdrawing and not being continuously fighting the wars of others,” he said.

“We Europeans, we have to take this into account; here we want to be a geopolitical actor,” Borrell said, adding “our strength can only come from our unity because each member of the European Union alone has not this capacity, the dimension, the strength to really influence on this new world. Altogether, we have it.”

The future is digital, but is it diverse?

Carmelo Anthony on his journey to the NBA, future and new memoir