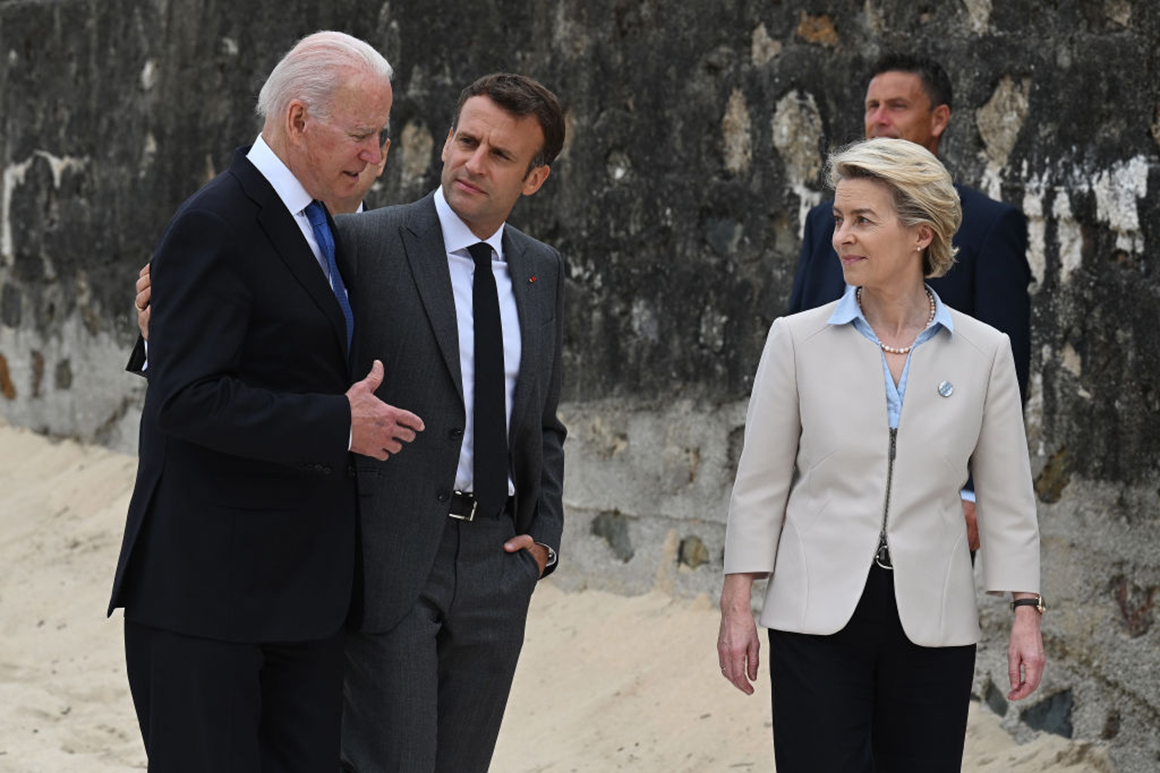 NEW YORK — The EU’s top leaders on Monday bluntly accused U.S. President Joe Biden of disloyalty to the transatlantic alliance, and demanded he explain why he misled France and other European partners in forging a new strategic tie-up with the U.K. and Australia in the Indo-Pacific.

The extraordinary rebuke of the new American president, whose election was celebrated across Europe as an opportunity to rejuvenate ties after the four years of belligerence and combativeness of Donald J. Trump, raised the prospect of a grave and prolonged breach among Western powers.

“With the new Joe Biden administration, America is back,” European Council President Charles Michel told reporters in New York, as world leaders convened for the high-level debate of the U.N. General Assembly. “What does it mean America is back? Is America back in America or somewhere else? We don’t know.”

By failing to consult EU nations about the new Indo-Pacific strategy, under which Australia canceled a blockbuster contract to buy French submarines, Michel said Biden had discarded an agreement reached by leaders after many hours of talks at the G7 summit in Britain in June to remain united in confronting authoritarian regimes, particularly China.

“The elementary principles for an alliance are loyalty and transparency,” Michel said, adding: “We are observing a clear lack of transparency and loyalty.”

European Commission President Ursula von der Leyen voiced her own dismay during an interview with CNN, in which she called the treatment of France  “unacceptable” and demanded Biden provide an explanation.

“There are a lot of open questions that have to be answered,” von der Leyen said. “One of our member states has been treated in a way that is not acceptable, so we want to know what happened and why. And therefore you first clarify that before you keep going with business as usual.”

Michel said that the 27 EU heads of state and government would discuss the rift with the U.S. over dinner on October 5 in Slovenia, ahead of a summit focused on the Western Balkans.

And von der Leyen’s comment signaled potential disruption of the planned first meeting of a new EU-U.S. Trade and Technology Council in Pittsburgh next week — an event that was supposed to showcase the renewed policy partnerships between Brussels and Washington.

But despite the irate rhetoric, it was unclear what, if anything, EU leaders could say or do about the matter, which some EU diplomats and officials suggested was more of a commercial dispute between Paris and Canberra, and a matter of wounded French pride, than a genuine cause for rupturing relations with the U.S. and sowing divisions that could weaken NATO.

By coming in so squarely behind French President Emmanuel Macron — who still has said nothing publicly and is not attending the U.N. meetings — Michel and von der Leyen seemed to elevate the risk of a prolonged dispute that could be exploited by China, Russia and other rivals, and to increase the difficulty in finding a face-saving exit for the Western allies.

Michel insisted the feud should not be viewed narrowly as a matter of French economic interests, but rather as part of a pattern of disregard for European allies and their interests by four U.S. presidents, beginning when George W. Bush decided to wage war in Iraq and Afghanistan.

“Obama with charisma, very polished, took important decisions in Syria with negative consequences for Europe, and we could observe also a lack of coordination, of consultation between the United States and European governments,” Michel said. “At least with Donald Trump it was very, very clear that he was not in favor of the European integration, that for him Europe doesn’t matter, but it was clear.”

Biden, on the other hand, talked a big game about renewing transatlantic ties, according to Michel, but then railroaded European allies with his decision about following through on Trump’s plan to withdraw from Afghanistan, “and,” he added, “a few days ago with this strange announcement.”

“When the transatlantic alliance is less robust and less solid, this is not good for the security in Europe and everywhere in the world,” Michel said, adding: “This is more than a bilateral trade or industrial topic. It’s more than that.”

Arriving in New York City on Monday, French Foreign Minister Jean-Yves Le Drian said all EU countries should be worried about the disregard the U.S. had shown its allies.

“Europeans shouldn’t be the rejects of the strategy chosen by the United States,” Le Drian said. “We are in this new state of mind, which means the Europeans need to identify their own strategic issues and to have a discussion with the United States on this topic.”

Le Drian said that conversation was likely to occur in the context of the development of a new “strategic concept” at NATO, a tacit acknowledgment that addressing the affront by the Americans would take quite a bit of time, and some convincing of EU countries heavily reliant on the U.S. for security guarantees.

A Scandinavian diplomat said Germany “shares the French concern about the U.S. disregard of the EU in this matter” — a point that was confirmed by Manfred Weber, the German leader of the dominant conservative European People’s Party (EPP) in the European Parliament.

“I think all Europeans should stand next to France because the main problem in this regard is whether we can really have with America a partnership-oriented, a trustful relationship,” Weber said at a meeting of party officials in Rome. “That is at stake.”

While Macron has remained silent, France has moved swiftly to retaliate by recalling ambassadors and also vowing to scuttle a proposed free-trade agreement between the EU and Australia.

But despite the very public pronouncements by the EU’s top presidents, some EU diplomats and officials expressed concern that France was dragging the rest of the Continent into an unnecessary fight largely because its own national ego was bruised.

“What’s of concern is that Paris is presenting something which was essentially a bilateral business deal as a blow to the EU as such,” said one Central European official. “I understand Paris might be offended and taken by surprise, but seriously?”

An EU diplomat from Western Europe reiterated the point: “It’s seen mainly as a bilateral issue, not an European one.”

The Scandinavian diplomat said there was some concern that Paris was blowing the matter out of proportion. “I think there’s a little bit of surprise about the harshness of the French reaction,” the diplomat said. “Is it mainly for domestic consumption? Is there a cool-headed foreign policy rationale …. or is it, plain and simple, hurt pride?”

Such misgivings, however, seemed all but certain to remain a minority view. With German Chancellor Angela Merkel about to retire, the EU is losing its most authoritative political figure, and many of the other 26 EU capitals are urgently looking to Macron, leader of the EU’s second-largest member country, to help fill some of the gap.

Earlier on Monday, some EU officials and diplomats said they were wondering how far the Elysée would go in trying to reframe the fallout as a call for greater EU unity, and to push for improving joint security and military capabilities, often referred to as “strategic autonomy.”

But as the day went on, that question seemed to be answered.

“I am convinced more than ever in the strategic autonomy,” Michel said, adding: “The announcement made by the United States, Australia and United Kingdom of this new military alliance in the Indo-Pacific, it’s only strengthening my personal opinion that we need to develop our own capacity to act,”

“It’s another wake-up call for strengthening the European defense, European foreign affairs,” Weber told POLITICO in Rome. “Everybody recognizes step-by-step that alone, as individual countries, we have no impact, no grip anymore on a global level.”

Still, EU countries have long harbored doubts about France’s true motivations in pushing for strategic autonomy, which many believe was cover for a “Buy French” economic development campaign on behalf of its defense contractors.

Eastern European countries in particular have long viewed the idea of strategic autonomy as dangerous and unrealistic, arguing it could undermine NATO and that Europe could never defend itself against threats, especially from Russia, without the U.S.

While the U.S. might be viewed as too important to lose, officials and diplomats said there was little reason for the EU to temper its wrath against Australia.

“Australia will pay a hefty price in terms of its relationship with the EU,” a senior EU diplomat said. “France will act in areas like trade, regulation, etc. and the Commission will not stand against France on an external matter.”

German MEP Andreas Schwab, also of the EPP, said the EU should not “lament” any perceived insult by Washington, but that Brussels should draw swift conclusions about next steps to take in its own interests.

“Europeans must not lament, they must take into consideration the fact that their investments and capacities are not as credible as what the Americans can give,” Schwab said. He added that the EU must question whether having a presence in the Indo-Pacific region is worth it, rather than focusing on areas closer to home, like Ukraine, Belarus and Africa.

Michel, however, said the EU should most assuredly have a role in confronting China.

“If we think in the United States that China is the main threat for the world,” he said, “it is very strange in my opinion that the United States and some other countries would make the choice to weaken the transatlantic alliance and not to strengthen the transatlantic alliance. It’s very strange to put Europe out of the game in the Indo-Pacific region.”

Of the new U.S., U.K., Australia agreement, dubbed AUKUS, he said: “It’s difficult to see this announcement as a sign of unity.”

Instead of ‘Rest in Peace,’ COVID Obits Become War of Words