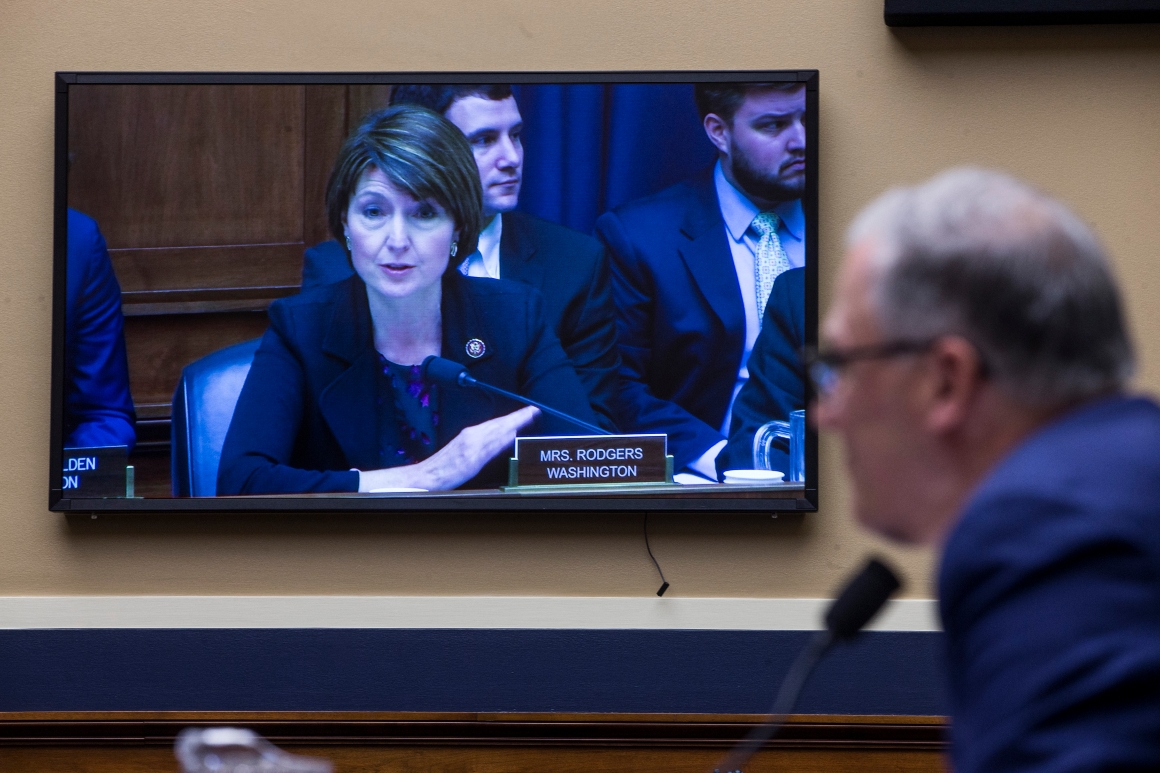 Democrats, who have spent years pounding online companies like Facebook and Twitter for spreading misinformation, say it’s just as important to scrutinize falsehoods by media outlets whose coverage reaches tens of millions of Americans. Their questions also reflect the blurring lines between the broadcasting and online realms, as more televisions are hooked to the internet and more video-streaming platforms begin to resemble traditional cable TV.

The Democratic lawmakers also cited the Jan. 6 assault on the U.S. Capitol as a major reason for their inquiries.

“Freedom of speech encourages us to ask tough questions about what is going on in the media, what is motivating the tidal wave of disinformation that is putting the lives of so many Americans and ultimately our democracy at risk,” said Rep. Mike Doyle (D-Pa.), who leads the House Energy and Commerce telecom subcommittee that held Wednesday’s hearing.

But Republicans said Democrats are steering their misinformation crusade in a dangerous direction by wielding the government’s powers against the editorial decisions of news outlets and television providers.

“Condemning the Jan. 6 attack and upholding truth and facts is a shared, bipartisan goal. But that is not what this hearing is about,” Rep. Cathy McMorris Rodgers of Washington state, the committee’s top Republican, said at Wednesday’s hearing. “If the majority was interested in meaningful change, you would not schedule a hyperpartisan hearing to shame and blame. You certainly would not send letters pressuring companies to block conservative media outlets. I am not only disappointed in this hearing, I am deeply troubled by it.”

Media organizations and Republicans had even sharper reactions to the letters that Reps. Anna Eshoo and Jerry McNerney, two California Democrats on the committee, sent Monday to a dozen TV carriers, ranging from cable and broadband giants like Comcast and AT&T to streaming services like Roku and Hulu. The letters asked what “moral or ethical” principles the companies apply when deciding what channels to host, and specifically asked if they are “planning to continue carrying Fox News, Newsmax, and OANN.”

“This is a rank abuse of their political power,” former Bush-era Federal Election Commission Chair Bradley Smith, who now heads a deregulatory nonprofit called the Institute for Free Speech, told reporters before Wednesday’s hearing. The Media Institute, a nonprofit with ties to some of the media companies that host the channels, condemned the letters as “an affront on the First Amendment.” Republican FCC Commissioner Brendan Carr accused Democrats of trying “to censor newsrooms.”

Republicans on the committee even likened the letters to Chinese-style censorship, while Rep. Bob Latta (R-Ohio) said during Wednesday’s hearing that Democrats are “doubling down on the ‘cancel culture’ of the left.”

Democrats defended their inquiry as entirely appropriate, saying rampant misinformation contributed to the Jan. 6 assault and the United States’ 500,000-plus deaths from Covid-19.

“The spread of disinformation poses a grave threat to our democracy,” McNerney and Eshoo said in a joint statement to POLITICO. “As Members of Congress, we have a duty to examine how the perpetuation of these falsehoods impacts the American public — from the effect on the response to the COVID-19 pandemic, to undermining our elections and culminating in a violent insurrection on the United States Capitol.”

The nonpartisan Congressional Research Service saw no “First Amendment red flags” in the letter, Eshoo told her colleagues during the hearing.

Democrats also accused the Republicans of hypocrisy when it comes to government power and companies’ free-speech rights, given their efforts under Trump to impose legal repercussions for online platforms that allegedly discriminate against conservative viewpoints. At the time, critics likened the GOP proposals to a new Fairness Doctrine for social media.

Trump also threatened more than once to pull the licenses of TV networks he accused of covering him unfairly. And in 2016, as a member of House Energy and Commerce, now-Sen. Kevin Cramer (R-N.D.) unsuccessfully pushed the panel to hold a hearing on media companies’ alleged left-leaning biases.

“Why is it OK to have a bunch of hearings and bring in [Twitter CEO] Jack Dorsey and [Facebook CEO] Mark Zuckerberg and whoever else to talk about disinformation or content moderation on online platforms, that’s OK, but it’s not OK to talk about it on cable and broadcast?” Sohn, who’s now a distinguished fellow at the Georgetown Law Institute for Technology Law & Policy, said in an interview. “I don’t think it’s beyond the pale for Congress to look at the spread of misinformation and disinformation on those [media] platforms.”

Democrats’ unhappiness with misinformation has also inspired interest among some progressives in the Fairness Doctrine, an FCC policy that for decades required television and radio broadcasters to grant balanced treatment to controversies. The commission killed it in 1987, a move that among other things fueled an explosion of right-wing talk radio.

“If there was ever a time to bring it back it’s now,” Yang tweeted about the doctrine on the day after the Capitol riots. He inaccurately suggested the doctrine could apply to cable news, when in fact it never did.

Now the issue is emerging as a potential headache for President Joe Biden’s appointees, even as left-leaning figures like Sohn dismiss fears of a Fairness Doctrine revival as a “bugaboo of the right” with limited prospects in Washington.

On Wednesday, 13 House Republicans led by McMorris Rodgers peppered FCC acting Chair Jessica Rosenworcel with questions about the Democrats’ misinformation efforts, pressing her to “publicly express your opposition to reinstating the Fairness Doctrine immediately.” They added, “We also request that you denounce the recent attacks on the First Amendment by House Democrats.”

Rosenworcel had been an outspoken critic of Trump’s quest to punish social media bias, accusing his administration of seeking to turn the FCC “into the President’s speech police.” She didn’t immediately comment on the Republicans’ latest questions, but FCC staff are reviewing the letter, a commission spokesperson said.

Here comes the GameStop rally, round 2