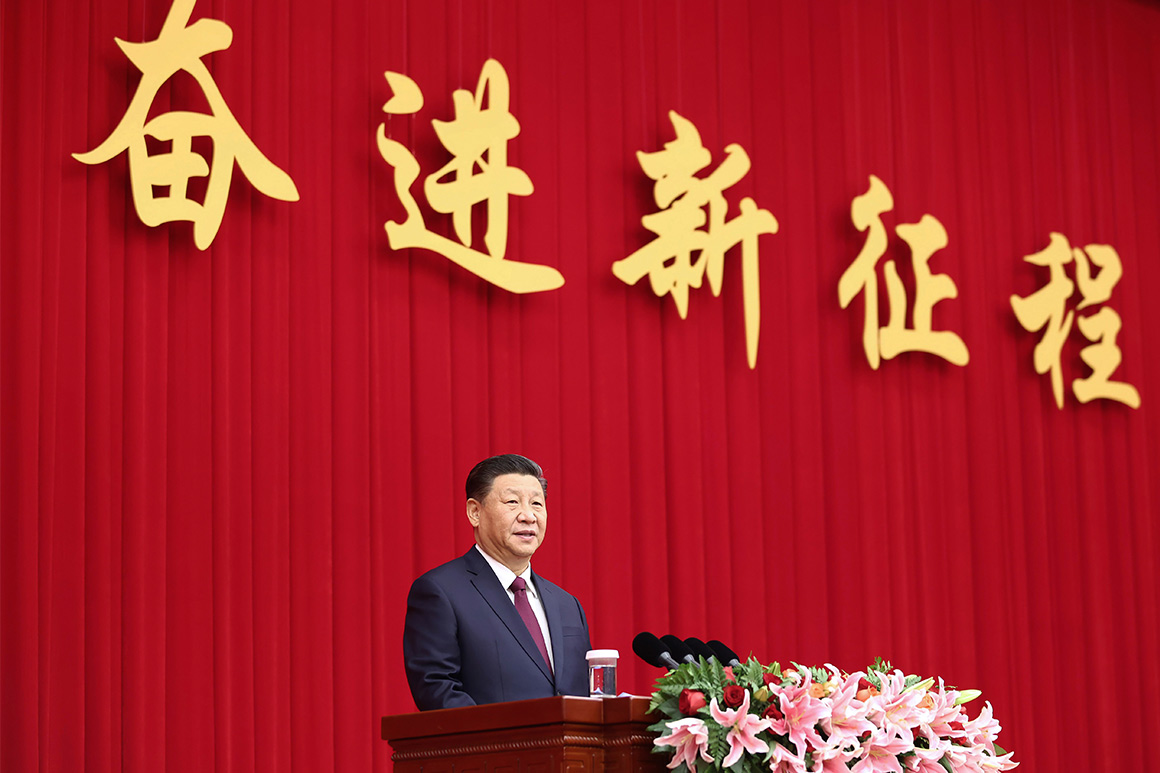 China’s double-barreled sanctions attack on the EU on Monday means the landmark Beijing-Brussels trade deal is now on life support.

Furious at being targeted by Chinese sanctions on a day of high diplomatic drama, prominent European parliamentarians are threatening not to ratify the EU-China investment pact sealed in December.

What a difference three months makes. Late last year, Europe’s top leaders such as German Chancellor Angela Merkel and French President Emmanuel Macron raced to secure an accord with Chinese President Xi Jinping, hoping it would make life easier for key EU investors in China such as carmakers.

But relations have soured unexpectedly rapidly since then, partly over increasing concerns about China’s crackdown against the Muslim minority in Xinjiang.

While the U.S. has described Beijing’s abuses against the Uyghurs as a genocide and has imposed a trade embargo, the EU has taken a far less confrontational stance. The carefully calibrated sanctions list announced by the EU on Monday targeted four Chinese officials in Xinjiang and the region’s public security bureau.

Given that seemingly restrained approach, Beijing’s almost immediate counterattack came as a shock. In a major escalation, China’s hardline wolf warriors showed that they were willing to sacrifice their trade deal with Brussels by directly targeting the Parliament rather than be lectured by Europe on what they see as matters of internal security. Only moments after the EU sanctions were announced, China imposed counter-sanctions on five leading MEPs, the Parliament’s subcommittee on human rights and top European academics covering China.

Intriguingly, Beijing said it was also sanctioning the EU Council’s Political and Security Committee, which is comprised of 27 Brussels-based ambassadors, but it’s still unclear whether the envoys themselves are affected. Think tanks frequently consulted by European officials also fell victim to the sanctions.

For lawmakers in the European Parliament, China’s actions were a deal breaker.

“It seems unthinkable that our Parliament would even entertain the idea of ratifying an agreement while its members and one of its committees are under sanctions,” said Marie-Pierre Vedrenne, point-woman on the EU-China deal from the liberal Renew Europe group.

China’s foreign ministry argued the EU’s sanctions were “based on nothing but lies and disinformation.” It then warned Brussels to stop “lecturing others on human rights and interfering in their internal affairs. It must end the hypocritical practice of double standards and stop going further down the wrong path. Otherwise, China will resolutely make further reactions.”

In a flurry of diplomatic activity late on Monday, France and the Netherlands said they were taking up the matter with their Chinese ambassadors. Dutch Prime Minister Mark Rutte said on Twitter: “China’s move is a completely unjustified response to the measures taken under the EU human rights sanctions regime. This will be taken up further in a European context.”

Raising the prospect of potential further sanctions over human rights, German Foreign Minister Heiko Maas said: “We sanction people who violate human rights, not parliamentarians, as has now been done by the Chinese side. This is neither comprehensible nor acceptable for us.”

This ramping up of tensions with the EU comes just as U.S.-China relations are also souring sharply. Only last week, the generally mild-mannered Yang Jiechi, China’s most seasoned diplomat serving in the all-powerful Politburo, launched a blistering attack on the U.S. political system while meeting Secretary of State Antony Blinken in Alaska. With Washington and Brussels still somewhat at odds on China policy, Blinken is due to visit Brussels from Tuesday, meeting EU officials, including European Commission President Ursula von der Leyen.

EU foreign policy chief Josep Borrell, who has been roundly criticized for displaying weakness on Russia, hinted at a tougher stance on Beijing.

The key battleground for the survival of the investment deal is the European Parliament. And its members reacted with outrage to Monday’s sanctions.

The center-left Socialist and Democrats, the second biggest political grouping in the chamber, said that Beijing would have to remove the sanctions to get a deal. The S&D will “make lifting of Chinese sanctions against Euro-MPs [a] condition for Parliament to enter any talks on EU-China investment deal,” the group said in a statement.

Iuliu Winkler, a center-right lawmaker who led the European Parliament’s monitoring group on the investment pact, on Monday night announced the cancellation of a meeting on the deal scheduled for Tuesday.

“Considering today’s developments in the EU-China relationship, particularly as regards the unacceptable sanctions applied against elected members of the European Parliament and its subcommittee on human rights, it has been decided that the organization of a China monitoring group [meeting on March 23] is inopportune,” Winkler, from the European People’s Party grouping, said in an email seen by POLITICO.

Bernd Lange, the Socialist chairman of the Parliament’s trade committee, which will be responsible for scrutinizing the pact, supported Winkler’s decision. “Today’s events clearly do not allow to continue with business as usual,” he said.

Cui Hongjian, director of the Department of European Studies at the China Institute of International Studies, said the Chinese sanctions on the EU could send a strong signal to Brussels to back off from further interference in China’s internal affairs, he told China’s state-run Global Times newspaper. For the EU, human rights are a “cheap weapon,” Cui said, adding that the bloc’s financial and military power was much weaker than that of Washington.

Philippe Le Corre, a China specialist at the Harvard Kennedy School, said the EU would have to walk a tightrope.

“On the one hand they’re trying to please big companies and that’s the idea behind [the investment deal]. On the other hand they’re also part of this group of democracies, so they have to show some displeasure about what’s going on in China.”

“My feeling is that China doesn’t care if things take place or not — it’s just ticking a box,” Le Corre said. “[The investment deal] was more a symbolic victory for China.”

This article is part of POLITICO’s premium policy service Pro Trade. From transatlantic trade wars to the UK’s future trading relationship with the EU and rest of the world, Pro Trade  gives you the insight you need to plan your next move. Email [email protected] for a complimentary trial.

Trial date set for alleged killer in 1974 Fort Worth cold…

‘Keep spending on transport ready for return to…