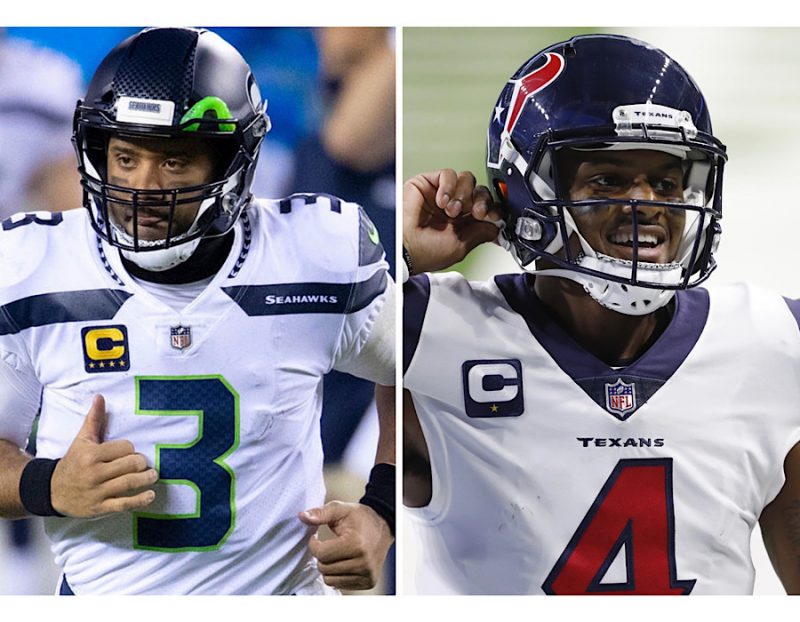 There are two unhappy quarterbacks making headlines during the NFL offseason, Russell Wilson of the Seattle Seahawks and Deshaun Watson of the Houston Texans. While each team is receiving trade offers for their star player, it’s unclear if either or both will be moved this year. There is one team, however, who is being linked to both players, and that’s the Chicago Bears, whose looking to replace the mistake that was Mitchell Trubisky, and end his error-filled era. With speculation abound regarding both quarterbacks, if you were the Chicago Bears, would you try harder to get Russell Wilson or Deshaun Watson, and what would you give up to trade for each QB?

This weekend the talk about Russell Wilson being interested in and perhaps targeting the Chicago Bears as his landing spot if/when he requests a trade from Seattle heated up, with the media quickly running to their laptops to put together their own offers.

Several media outlets noted that the Seahawks would want a huge package for their quarterback, one that would include a big-name player going back to the Pacific Northwest in exchange for Wilson. The name often mention was defensive standout Khalil Mack.

Wilson turned 32 in late November, and Deshaun Watson will turn 26 early in the 2021 season, making the trade value for each player different to calculate. Clearly the Seahawks have had great success with Wilson running their offense, while the younger Watson has been a fantasy player’s dream, but hasn’t done much in the postseason, yet has played well enough to earn a huge four-year contract extension that begins this upcoming season.

With quarterbacks playing into their late 30’s and early 40’s nowadays, 32 or 33 may not be old for players at the position; however, Russell Wilson may not be able to rely on his legs too much longer to bail him out of trouble. Also, with Watson probably having the stronger throwing arm, playing in the Windy City come November, December, and dare I say the postseason, he might work out better for the Chicago Bears.

Houston is still drawing a hard line in their dealings with Deshaun Watson, with reports this weekend that they are willing to let him sit out the 2021 season rather than cave to his trade demands. Perhaps they understand having a franchise quarterback under contract for the next four seasons is a good position to be in, and trading him away for a bunch of lottery tickets known as draft picks won’t make it easy to replace him anytime soon. It also appears that Watson has his heart set on going to the AFC East, with the young quarterback spending a lot of time in Miami hoping the Dolphins fulfill his request and make a deal with Houston for his services.

If Russell Wilson is able to force his way out of Seattle and Chicago is a team he wants to play for, then the Bears would be crazy not to make an offer for him if they believe they are a quarterback away from reaching the postseason and making a Super Bowl run. That position is even more strengthened by Watson appearing to want no part of the NFC North or playing in cold weather, something that would get in the way of his stats, which appears to be more important to him than, you know, winning or being a team player.  Besides, if I was the Chicago Bears, seeing how Watson has been upset for two straight off-seasons would have me blocking any phone call from the state of Texas.

If the Bears can get Russell Wilson, then that’s the play to make, and if not, there are other quarterbacks out there with less baggage and drama than Deshaun Watson.

Good Idea Or Bad Idea: MLB’s Experiment With The DH

Elon Musk suggests Autopilot not to blame for fatal crash

Can this mineral with an obscure backstory revolutionize…