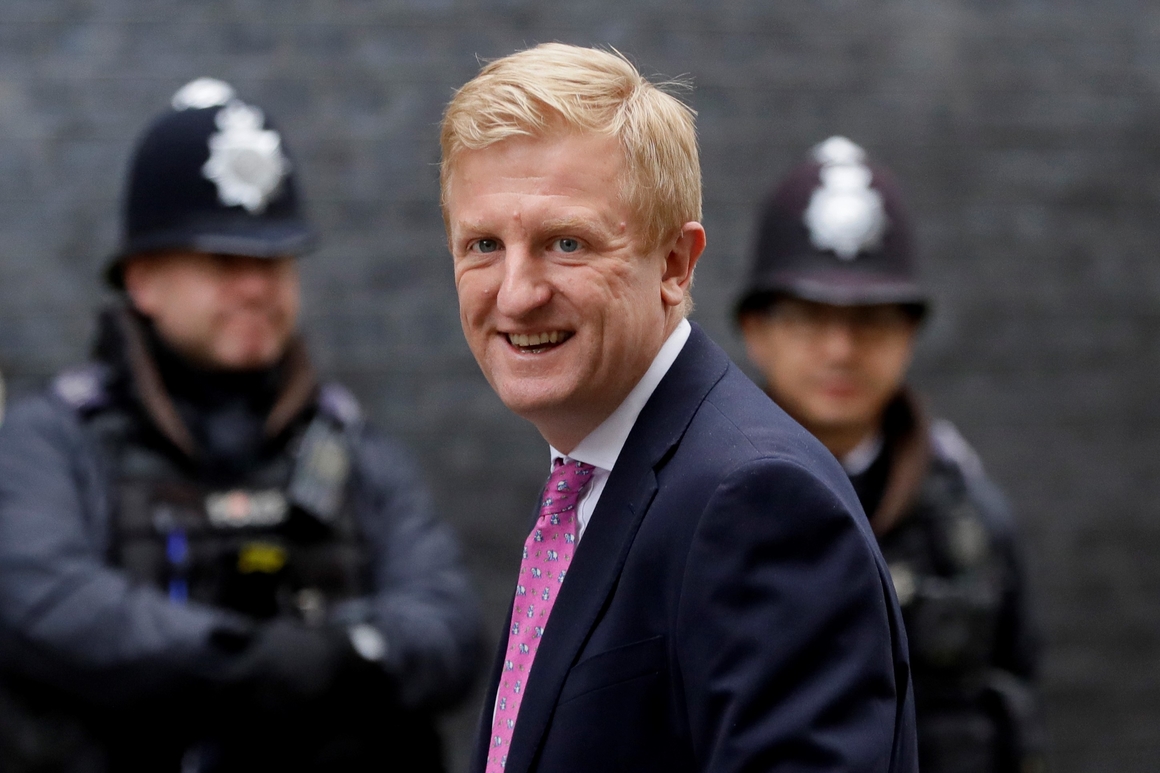 The unassuming adviser-turned-MP-turned Cabinet minister is rarely out of the headlines these days, his unrelenting war on metropolitan liberalism winning him the unofficial moniker of Minister for Culture Wars.

From warnings that museums must “retain and explain” controversial statues with links to slavery to his defense of the singing of the Land of Hope and Glory — colonial overtones and all — at the Last Night of the Proms and an order to fly the union flag on U.K. government buildings every day, the culture secretary is getting a reputation for taking a stand.

Even beyond the culture brief, in the tech world, he assured the right-wing Daily Mail newspaper in May that flagship online safety regulation will not become a “woke charter.”

Dowden’s foes say the former aide to the Tory modernizer David Cameron — who campaigned to Remain in the European Union — is shamelessly stoking Boris Johnson’s culture wars in pursuit of promotion.

“Oliver Dowden was once a moderate Conservative,” Nick Cohen, a columnist in the left-wing Guardian newspaper, wrote in June amid claims Dowden was vetoing the appointment of certain trustees of cultural institutions. “Transforming himself into a thuggish censor is his way of assuring the new regime that he is an obedient soldier worthy of promotion out of his backwater department,” he added.

Despite his role in the more centrist Cameron government, officials and colleagues say that on the anti-woke agenda, Dowden is not just following orders in hopes of personal advancement.

One of the culture secretary’s most recent attacks was on the England and Wales Cricket Board, which suspended 27-year-old bowler Ollie Robinson from the test team for a series of racist and sexist tweets made when he was 18. Dowden, whose brief also covers sport, described the move as “over the top.”

“It was the PM who said it first [at a morning meeting] and then Dowden picked it up. We’d spoken to him that morning,” a government official familiar with the dynamic said.

And on Sunday, Dowden went out to bat against a campaign for advertisers to boycott Britain’s newest broadcaster, GBNews, which is positioning itself against the “metropolitan” media consensus. “If you don’t like those ideas, switch over — don’t silence,” he wrote in an oped for the Sunday Telegraph. “We shouldn’t be blocking people from the conversation simply because we disagree with them.”

Several current and former colleagues say Dowden’s instincts echo those of the prime minister, and have long made him the ideal foot soldier for Johnson’s war on political correctness.

Even during his tenure as David Cameron’s deputy chief of staff, Dowden wore his patriotism with pride — replacing the “dreary modern art” in the No. 10 Downing Street office he shared with Cameron’s Cabinet Office minister, John Hayes, with a portrait of Queen Victoria and “emblems of Britishness,” according to former colleagues.

Dowden, according to Hayes, who chairs the “Common Sense Group” of anti-woke MPs, is “an authentic traditional communitarian Burkean Conservative,” a reference to the 18th-century Anglo-Irish philosopher and politician Edmund Burke — a strong advocate of family, community, country and institutions like the church and monarchy.

While Dowden slotted into Cameron’s regime and had skills that could be “deployed” by different leaders, Hayes said, “the political mood” has “moved on in a way that’s closer to Olive’s instincts” (Many friends and colleagues call Dowden Olive due to a photocopying error which ommitted the ‘r’ in his name.)

“There’s no one better equipped to take on the woke warriors,” added Hayes.“The prevailing themes in politics are very well suited to both his skills and instincts.”

The decision by a handful of top U.K. clubs to form an uncompetitive breakaway European Super League hasn’t hurt Dowden’s career either.

Both he and the prime minsister, neither of whom are big football fans, came out early and hard against the plan threatening legislative sanctions against the clubs — a move which eventually led to its downfall and a huge political win for the Conservatives.

There was surprise on a call just hours after it had emerged when Dowden said he wanted to go hard and kill the super league plan, even though success was far from guaranteed at that point, according to one official on the call.

“Oliver was definitely across it,” the first government official quoted above said. “No. 10 probably came over the top a bit harder, but he was definitely on the right side of the argument early on. I think Oliver handled it very well.”

“He has got incredibly good antenna, and he would have seen straight away this was a major issue that the public are going to want to see the government do something about,” according to a friend who works in and around Westminster and who has known and followed the culture secretary for years.

Those who know Dowden well point to his background as key to his political philosophy.

In contrast to Johnson’s gold-plated private Etonian education, Dowden was state-educated — one of few in the Cabinet. His father worked in a factory in Watford, one of the less affluent London suburbs, and his mother worked in a pharmacist in St Albans.

“He has the advantage of coming from an ordinary background,” Hayes said. “He is not disadvantaged by privilege, because people privileged by birth often struggle to see the world clearly,” Hayes said. “He speaks for a huge number of people who feel neglected by the liberal establishment, because it either doesn’t understand them, or doesn’t like them very much.”

Other colleagues are puzzled he doesn’t make more of his background in a sometimes class-obsessed Westminster.

“He’s actually got an amazing backstory, but you wouldn’t think it from talking to him because you’ve got that sort of sort of pretty voice,” said a former colleague, speaking on condition of anonymity.

“It hides the fact that he’s proper working class. He’s not like some in the party who claim, because they are northern, that they are working class. I mean, he’s the real deal,” the former colleague added.

“I think he’s got a bit of that Oxbridge snobbery that you inherit when you’re not posh and you go to Oxbridge and you want to fit in,” the colleague added.

After leaving school, Dowden’s path to the Cabinet has been more traditional. He went on to Cambridge University and joined the Conservative research department — a training ground for many senior politicians, including Cameron and former Chancellor George Osborne.

There he got to know Johnson’s key adviser, Dougie Smith, who is married to head of policy Munira Mirza — the power couple long credited with pushing the culture wars agenda in No. 10.

“He’s very tight with them. I mean they go a long way back,” the friend quoted above said.

In a sign of how valued Dowden is to the Johnson team, he is tasked with helping the prime minister prepare for weekly Prime Minister’s Questions — often the biggest political moment of a premier’s week — along with Cabinet Office Minister Michael Gove. It gives him access to Johnson that few others in his top team enjoy.

But his role as deputy chief of staff to Cameron, before becoming an MP in 2015, means Dowden “knows his way around Whitehall.”

“I think that what Boris has been in need of is ministers who are technocratically really strong in terms of being across the detail and then actually delivering,” a third former colleague said.

“I think that is where he has gone from strength to strength,” he added. “Actually he’s one of the few people who did support Remain who found favor in this government.”

This put him at an advantage, according to colleagues, when it came to bailouts during the Coronavirus pandemic — something that won him plaudits from the culture sector.

Nicholas Coleridge, chairman of the Victoria and Albert Museum, who has worked closely with Dowden, said he “fought a good war” during the pandemic.

“I don’t believe that the rescue packages for culture would have been nearly as high as they were, or nearly as strong as they were, had he not been battling for the sector with the Treasury. The reason for that is firstly, he knows his way around Whitehall, and secondly, he has a lot of goodwill.”

His friendship with with SW1’s other big power player, Chancellor Rishi Sunak, may also play its part.

Dowden, Sunak and Communities Secretary Robert Jenrick, dubbed the “three Musketeers” by colleagues, have been credited with reading the political tea leaves and giving key momentum to Boris Johnson’s leadership bid by penning an early joint article pledging their support.

“Whenever you go to a drinks reception you will always spot Rishi and Oliver together,” the friend said.

That Dowden has made his mark is despite rather than because of his responsibility for the online safety bill, observers say, a crucial piece of legislation that seeks to regulate harmful content on the internet and one of the biggest items in his in-tray.

It’s a policy area the prime minister has shown little interest in, according to the first government official quoted above, who is familiar with Johnson’s agenda. “I don’t think I’ve ever had a conversation with him about it,” they said.

Johnson was reluctant to sign off aspects of the early proposals as foreign secretary, according to a former official familiar with the government write-round process of the bill. “It is very much not a sort of a natural place for Boris Johnson to be,” he said, because it runs counter the to prime minister’s instincts on freedom of speech.” It’s just absolutely not what Boris Johnson would want to do as his big policy moment.”

“I think it’s been difficult for Dowden and his team because he’s ended up having to talk about the negative impact of tech and bring tech to heel, which I get the impression isn’t actually where he is,” the former official said.

A fourth former colleague sees the online safety regulation as a useful vehicle for the culture secretary, however, in promoting the “we protect” agenda — something he said was a Conservative value. He also warned there could be pitfalls ahead, with expectations high among MPs about what the new laws could achieve.

“I think, in a funny way, having sort of set this to sea, I think he’s now battling to make sure that he controls the vessel and its journey,” the colleague said.

With Johnson said to be mulling a reshuffle of his Cabinet this summer, friends say the legislation may not end up being Dowden’s problem to deal with.

“I suspect he won’t be in a position to see [the tech agenda] through,” the friend, who has followed Dowden’s career said. “He is seen as a very, very safe pair of hands who can deliver in operationally difficult departments.”

“Where there are potential issues on an operational level — whether it’s health, whether it’s education. He would be a very good fit for those departments, because he’s trusted by the prime minister, he’s very close to the chancellor and he knows how to get the best out civil servants.”

This article is part of POLITICO’s premium Tech policy coverage: Pro Technology. Our expert journalism and suite of policy intelligence tools allow you to seamlessly search, track and understand the developments and stakeholders shaping EU Tech policy and driving decisions impacting your industry. Email [email protected] with the code ‘TECH’ for a complimentary trial.

After the latest plunge, Bitcoin is underperforming stocks this year