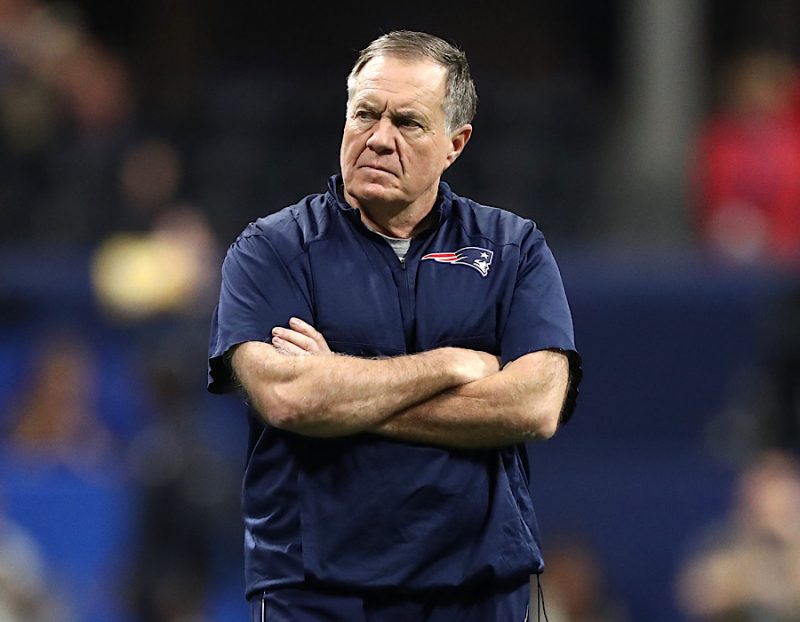 Bill Belichick Is No Longer The GOAT If He Makes This Trade | Sports Takes & News | TooAthletic.com

The rumors of the next team to make a trade this NFL offseason began on Sunday, with all signs pointing to the New England Patriots. The next move many expect Bill Belichick to make is for a quarterback, either by moving up in the draft or, dare I say, trading for one on another team, with one name continually popping up. I will say this in advance in case it happens: If Bill Belichick trades for THIS QUARTERBACK, then in my mind, he will lose his GOAT status.

The debate on why the San Francisco 49ers traded up with Miami for the third pick in this year’s draft is still raging, with people saying the days of Jimmy Garoppolo being the 49ers quarterback being numbered.

If you take the position that the 49ers are using their acquired pick on a quarterback, then trading up for one of their own would be difficult for the New England Patriots. That’s because the first pick, held by Jacksonville, is assuredly going to be used on a quarterback, and it’s unlikely the New York Jets with the second pick will trade with a divisional rival. That means fourth is as high as Bill Belichick could be able to trade up if he wants to guarantee a top quarterback from this year’s class.

The other option is that New England, holders of the 15th pick in this year’s draft, could make a bold move by using their assets to acquire another quarterback, such as Jimmy Garoppolo, who, up until now, has not officially been on the trading block if you ask anyone from the 49ers. With the trade they made last week, however, many feel San Francisco is bluffing and will soon be willing to part with Garoppolo. This is where the drama begins for me and where Bill Belichick is walking on very thin ice, and why his reputation is on the line.

San Francisco had Jimmy Garoppolo dropped into their lap by New England for a second-round pick after a power struggle between Bill Belichick and Tom Brady, a power play that Brady won, which is how the 49ers were allowed to get away with grand larceny. That trade illustrates that Bill Belichick the head coach and the general manager are the same person, which means you can’t evaluate one without judging the other’s performance too. As a result, it’s safe for me to say that Belichick the coach traded away Jimmy Garoppolo and Belichick the general manager needs to correct that mistake by getting him back. It also means Belichick the GM never explained himself to owner Robert Kraft when selecting him back in 2014 and put the team in the difficult position they are in now, being forced to give up draft capital to acquire a player previously on their team.

For the simple drama of the moment, it would be thrilling to watch both Bill Belichick and Jimmy Garoppolo at the first press conference together, and hopefully someone in the Boston or from the national NFL media will have the guts to ask this tough question: what happened? Because if New England brings back Jimmy Garoppolo, it will prove that they were winning despite Belichick and Kraft, and only because of Tom Brady running the show on game day, with the head coach and owner getting in the way rather than contributing to their success.

Bill Belichick knew that he would need to replace Tom Brady, and he found the person he wanted in the 2014 NFL Draft. Belichick the coach, however, tried to win a power play against the one player he allowed to become more important than he was, the quarterback, and Belichick the general manager needed to make a decision and made the short-term, not the long-term choice. That’s why the New England Patriots are a desperate team in 2021, spending on the free agent market and about to trade away their draft assets for a quarterback they once had on their roster.

The dirty laundry is about to be aired out in New England, and it will show that the head coach is a spiteful man who screwed over his own organization to get back at his quarterback. Soon, if that traded player comes back, Bill Belichick will give up his GOAT title and be showed for what he truly is, just another overbearing head coach who just wants to do things his way, period.

Bill Belichick Is No Longer The GOAT If He Makes This Trade | TooAthletic.com

The post Bill Belichick Is No Longer The GOAT If He Makes This Trade appeared first on TOOATHLETIC TAKES.

Pot Use as a Teen, Less Success as an Adult?