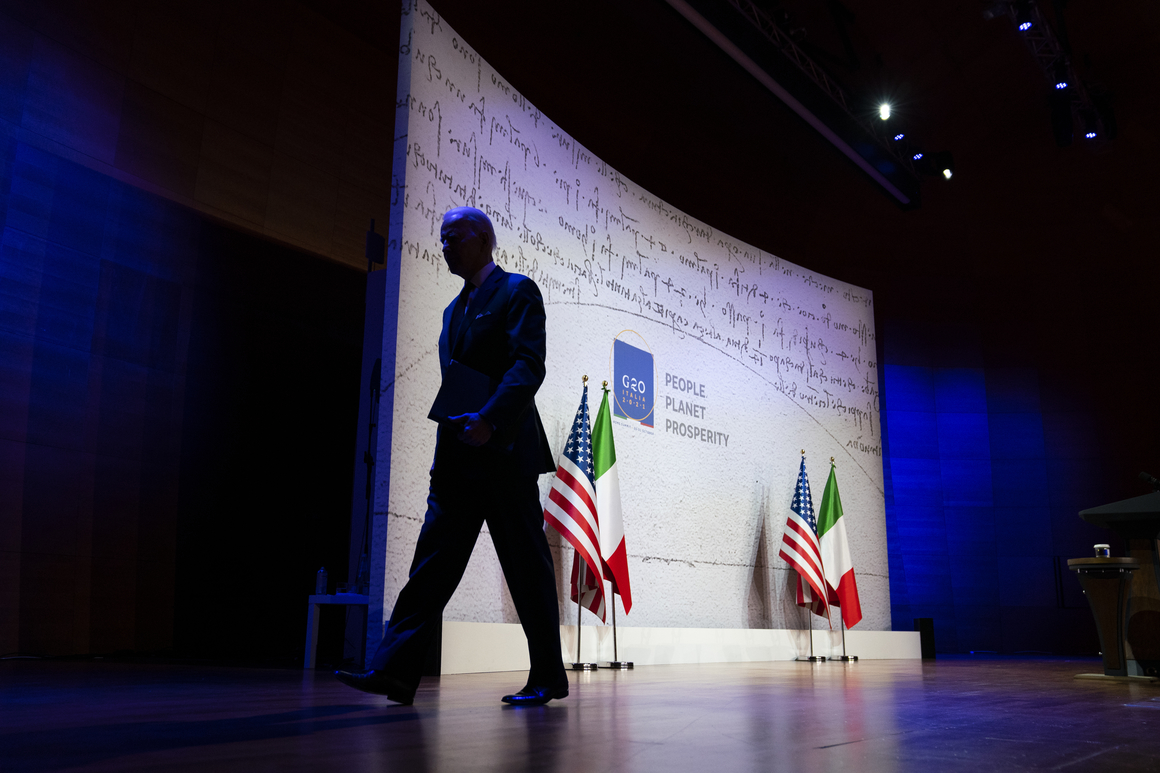 ROME — U.S. President Joe Biden on Sunday blamed Russia and China for any disappointment over the level of commitment by G20 leaders to fight climate change.

“With regard to the disappointment, the disappointment relates to the fact that … not only Russia but China basically didn’t show up in terms of any commitments to deal with climate change,” Biden said at his news conference at the end of the two-day leaders’ summit in Rome.

“And there’s a reason why people should be disappointed in that,” Biden added. “I found it disappointing myself.”

The leaders of the G20 nations, including Russian President Vladimir Putin and Chinese President Xi Jinping, collectively committed to stronger action than ever before to limit global warming. But they failed to strike a deal on phasing out coal because of opposition from a small group of countries, including Russia and China.

Biden acknowledged the progress but also name-checked Saudi Arabia among countries that he argued are still not doing enough.

“We passed a number of things here to end the subsidization of coal,” Biden said. “We made commitments here from across the board, all of us, in terms of what we are going to bring to the G26.” He was referring, in fact, to the COP26 climate conference in Scotland, which began on Sunday and where many leaders headed directly from Rome.

“More has to be done,” Biden said, continuing his riff on climate change. “But it’s going to require us to continue to focus on what China’s not doing, what Russia’s not doing and what Saudi Arabia is not doing.”

The leaders’ final G20 communiqué left plenty of room for interpretation over who needs to carry the burden. After the meeting finished, Chinese state media reported Xi had told his fellow leaders that richer countries bore the responsibility for cutting emissions faster.

Russian President Putin, participating in the G20 summit by videoconference, insisted that his country was living up to all of its commitments.

“Russia, like other countries, is experiencing — actually experiencing — the negative bearing of global warming, and here is why: We are faced with desertification and soil erosion, and we are especially worried about the thawing of the permafrost, which accounts for a significant part of Russia’s territory,” Putin said, according to a Kremlin transcript of his speech.

“Naturally, our country is vigorously participating and taking the lead in international climate mitigation and stabilization efforts,” he added. “We faithfully comply with all our obligations under the U.N. Framework Convention on Climate Change and the Paris Agreement.”

Russia has relatively minimal commitments under international climate agreements because of how its economy shrunk after the collapse of the Soviet Union.