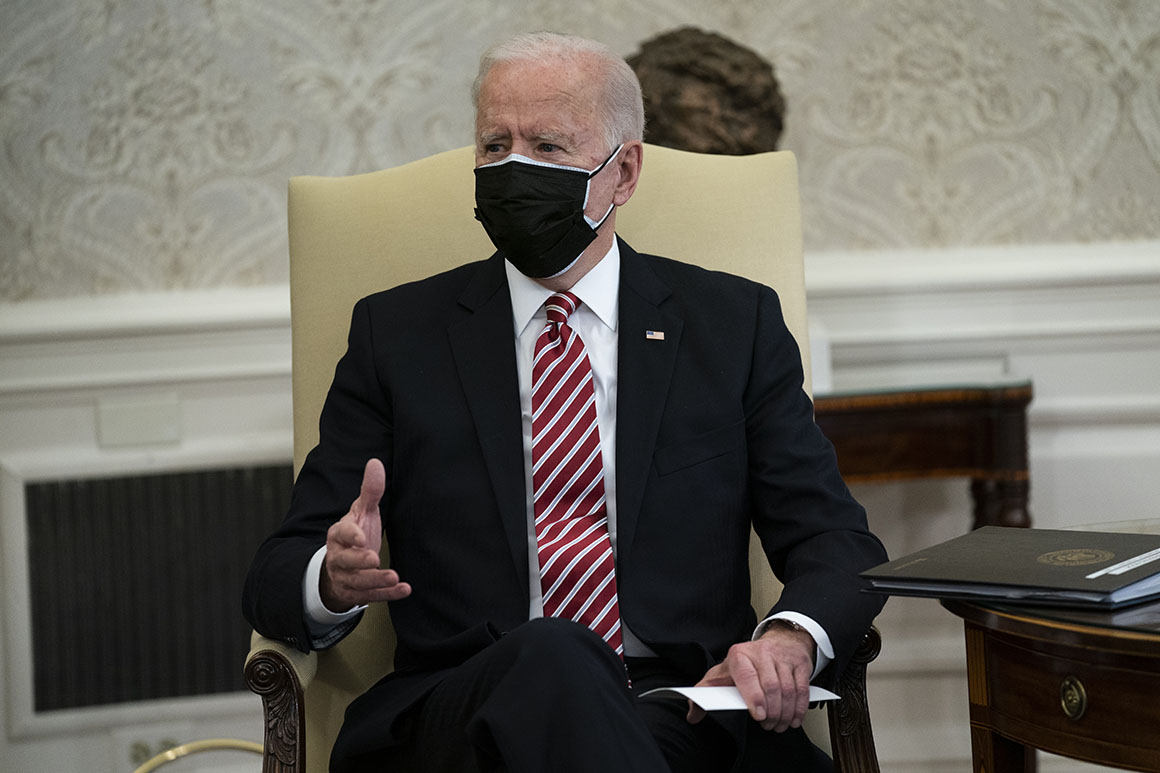 Austria and Denmark eye alliance with Israel on coronavirus…

Sitting in the Oval Office with Republican and Democratic elected officials last Friday to advocate for his $1.9 trillion Covid relief package, he didn’t hide his skepticism.

“Doesn’t look like we can do it,” he said of the minimum wage hike.

For weeks now, the White House has been trying to manage expectations on the feasibility of advancing a $15-an-hour minimum wage provision through a broader “rescue” package. Biden first suggested it might not make it into the final Covid relief bill in an interview with CBS prior to the Super Bowl, noting his belief that the Senate parliamentarian would determine it did not jibe with budgetary rules that allow a bill to pass with just 51 votes in the Senate.

His comments drew pushback from fellow Democrats, who have argued that raising the minimum wage isn’t just necessary for an economically-battered country but is sound politics as well. They have urged the White House to find avenues for making it reconciliation-compliant, to push party members skeptical of a major minimum wage hike to get on board and to consider the procedural nuclear option of having the party—with Vice President Kamala Harris serving as the tie-breaking vote—overrule the parliamentarian.

“Given the makeup of the Senate, this is our best opportunity and the right moment in the midst of this pandemic, to give millions of workers a long overdue raise,” Rep. Pramila Jayapal (D-Wash.), the progressive caucus chair, said on a press call with reporters on Thursday.

Biden’s suggestion to mayors and governors, that they start preparing for the absence of a minimum wage hike in the Covid bill, suggests what has been hinted at elsewhere: He is reluctant to deploy such strong-arm options.

“President Biden has been consistent in private and public about his commitment to raise the minimum wage to $15 an hour, which is why he included it in his first major piece of legislation,” said White House spokesperson Mike Gwin. “That commitment will remain unshaken whether or not this can be done through reconciliation.”

The meeting with state and local leaders included a wide-ranging conversation with Biden, touching on everything from municipal assistance to the importance of reopening schools, with Biden sharing concerns about how shuttered classrooms are impacting working mothers. But some in the room made a point of pushing back on his proposal to include the higher, $15 minimum wage in the $1.9 trillion relief package.

Maryland Gov. Larry Hogan, one of four Republicans at the meeting, stressed to Biden and the group that he didn’t think raising the wage was directly related to the immediate problems caused by the pandemic, according to two of the sources. Biden didn’t push back on Hogan’s point at the time. Nor was there a protracted discussion on the minimum wage. The conversation simply moved on.

Hogan also urged Biden to help ensure that the package was as bipartisan as he could, a point another official in the room said the president appeared receptive to.

“I really need your help on this,” Biden told the group. “It needs to be bipartisan.”

Heather Caygle contributed to this report.

Is a 9/11-Style Investigation Into the Insurrection Even Possible?

The Supreme Court heard arguments Tuesday in a case that…

Karl Rove: There is plenty of evidence of massive border…

Mom reports 6-year-old missing, but police say she ran him…

The problem with building ‘affordable’ housing…

Dozens of arts freelancers lose out on Covid support over…