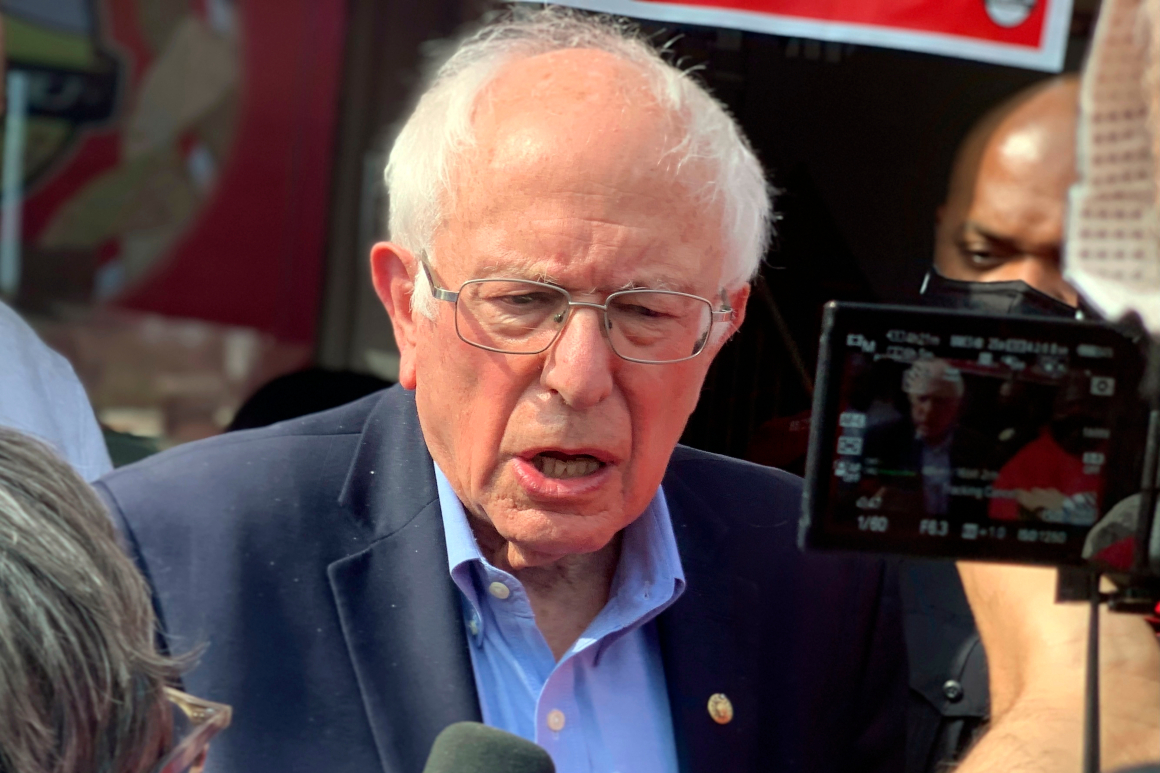 If the push in red-state Alabama is successful, it could galvanize more organizing efforts at Amazon and other large retailers across the country. If it fails, it could become a lightning rod for Democrats’ efforts to push through one of the broadest expansions of collective bargaining rights in nearly a century — yet, at the same time, embolden a triumphal business community to harden its stance against organized labor.

“The implications of this election transcend this one warehouse, and even this company,” said Stuart Appelbaum, president of the Retail, Wholesale and Department Store Union, which is organizing the workers. “It’s about the future of work, and how workers are going to be treated.”

The visit by Sanders, a Vermont independent, comes at a pivotal moment for Democrats’ and President Joe Biden’s sweeping efforts to rebuild the middle class by empowering workers and unions. Their proposals to raise the federal minimum wage to $15 and make it easier for employees to unionize are being met by a wall of opposition from Republicans and the business lobby, who say such moves would cripple the economy and bleed American jobs. And the Democrats’ lack of a clear majority in the Senate will make passage of any far-reaching legislation difficult.

The employees at the Amazon warehouse — a majority of them women and minorities — were considered “essential” during the coronavirus pandemic and ordered to continue working as much of the rest of the economy shuttered. Workers say they began organizing over concerns about the spread of the virus, and their frustration over racial injustice sparked by the George Floyd protests last spring. But the complaints go beyond the pandemic to what some say are onerous conditions.

“Amazon is a big plant, about the size of a football field. They want us to go to the bathroom and come back to the machine in five minutes,” said Linda Burns, who was injured on the job at the Bessemer facility. “They say we have quote unquote good insurance. I’m still getting bills in the mail off y’alls good insurance.”

Jennifer Bates, who also works at the facility, brought her case to Washington.

“Amazon’s going to poor communities claiming that they want to help the economic growth,” Bates said during a recent congressional hearing. “That should mean … a living wage and benefits that truly match the cost of living, and ensur[ing] workers work in safe and healthy conditions, because we are not robots designed to only live to work.”

Amazon responded to the union drive by requiring workers to attend “union education meetings,” Bates told members of Congress, as well as posting “anti-union” signs around the fulfillment center and sending messages to workers’ phones.

Amazon declined to comment for this article. But the e-commerce giant’s corporate Twitter account in recent days has directly addressed Democrats’ criticism about working conditions at its facility.

Sanders “has been a powerful politician in Vermont for 30 years and their min wage is still $11.75,” the company tweeted on Friday. “Amazon’s is $15, plus great health care from day one. Sanders would rather talk in Alabama than act in Vermont.”

The National Labor Relations Board will begin counting the votes on March 30, a process that could take a week or longer. The voting itself spanned two months because it was done by mail-in ballot as a safety precaution during the pandemic. In-person voting might have taken a few days.

Those critical of labor unions caution that such drives are often heavily influenced from elsewhere and can leave local workers caught in the fray.

“There are definitely concerted, planned, well-financed campaigns by major labor unions to come in from the outside and organize new, high-profile workplaces, and the Amazon campaign is a great example of that,” said Maxford Nelsen, director of labor policy at the Freedom Foundation, a nonprofit that’s critical of unions. “And employees are in the middle of trying to pick between the two sides.”

Nelsen rejected the idea that the union vote carried any broader significance for American labor policy.

“If the employees at the end of the day vote against unionization. I think that means a majority of the employees weren’t convinced by the union’s arguments,” Nelsen added. “That doesn’t mean anything more, anything less than that.”

The landmark labor law overhaul bill backed by Biden and unions, the Protecting the Right to Organize Act, would prohibit companies from requiring their workers to attend anti-union meetings, Sanders told reporters after the rally.

It would also call for management to go to mediation and arbitration with the union if the two sides are unable to reach an initial collective bargaining agreement.

That bill passed the House earlier this month with just five GOP votes in support, making it a long shot in the 50-50 Senate.

But union and worker advocates say the unusual public attention on the union drive and the conditions at the fulfillment center have captured the moment and are emblematic of how weak federal labor laws and widening economic inequality have stacked the odds against workers.

“There has never been a greater argument for labor law reform and the PRO Act than this election,” said Appelbaum, the union leader.

Alabama is one of 27 states that have enacted right-to-work laws, meaning that workers can opt out of union membership if they choose. The PRO Act would allow unions to override those laws and collect “fair share fees” from non-members for the costs of collective bargaining.

Unions say they are already seeing momentum from the effort in Bessemer, and that the drive could also mobilize hesitant workers in states with stricter collective bargaining laws as well as younger workers who may be unfamiliar with unions after years of declines in membership.

And their next target may not be far away. Amazon already has plans to expand in Bessemer and neighboring Birmingham later this year.

“I think this campaign can be seen as a bellwether for things to come,” said Christian Sweeney, deputy organizing director for the AFL-CIO. “We’re seeing more interest on the part of workers in the South in lots of different sectors, from manufacturing to higher education to health care.”

Bay Area Teen Shot Through Her Eye in a ‘Hate Crime,’ Family Says